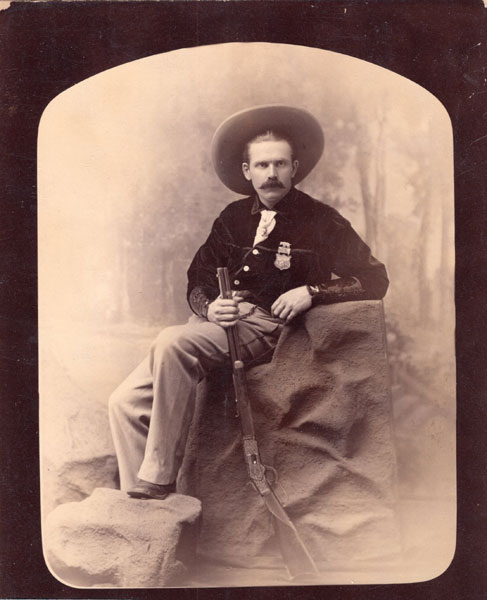 Photograph Of Doc Carver, "Spirit Gun Of The West"

First edition. 8" x 6 1/4," mounted to 9 1/4" x 7 1/4." The photographer is unidentified. Pencil notations on the verso identifying Doc Carver as "Spirit Gun of the West." William F. (Doc) Carver was born (May 7, 1840 - Aug. 31, 1927) at Winslow, Illinois. Carver was a plainsman, trapper, buffalo hunter, Medicine Chief of the Santee Sioux, Worlds champion marksman, and Originator of the American Wild West Show. He became an excellent rifle shot and won fame in that pursuit. He and Buffalo Bill Cody met in New Haven, Connecticut in 1883, and agreed to form a Wild West Show partnership, which became a short-lived operation. However, he was Cody's first Wild West Show business partner. Clark & Brunet 250 say: "Carver was a frontiersman, but more importantly a showman of the first rank. His skill was real, and his reputation amongst great shooters, remains. This biography is based, in large part, on the sixteen volumes of manuscripts and scrapbooks compiled by Carver." Minor wear to the two top corners else a fine, bright image of an important western character. Provenance: The Robert G. McCubbin Collection.

The Thoen Stone: A Saga Of The Black …
by Frank Thomson