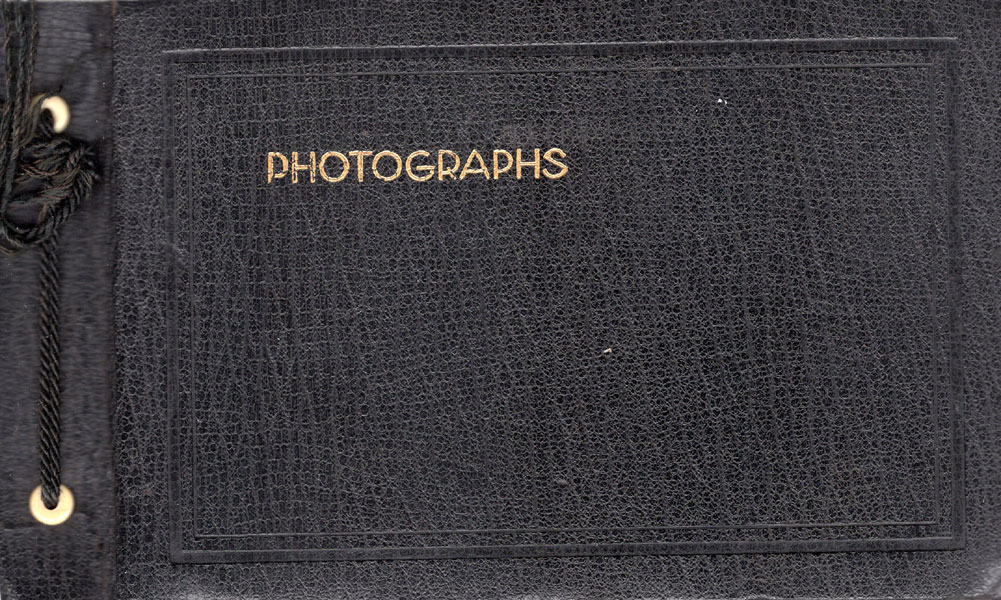 5 1/4" x 8 3/4" x 2" in limp faux black calf post-binder with title (PHOTOGRAPHS) stamped in gilt on front cover, sewn at gutter margin with black silk braid. [100 pp] on thick black paper. 178 silver gelatin and silver print photographs, sized 1 1/2" x 2" up to 4 1/2" x 6 1/2," all with identifying text below in white ink. A well-documented photo album recording the automobile travels of a young German-American woman and her beaus through the West and Midwest from before World War I, through the Roaring 20s, the Great Depression, and post-World War II. The album carefully documents the friends, family, and places visited, as well as the vehicles. The earliest automobile trip involves a 1923 Ford Model T 2-door given to our chronicler by Mac McGuire, who also generously presents a trotting racehorse, with several photos showing the car, scenes in and around Illinois, Illinois horse tracks, as well as Mac himself. The 1925 Buick 2-door coupe experiences a much wider group of excursions including stops and views through Telluride, Colorado, with views of the town, street scenes, the mines, as well as the “Gang” at the Hotel Telluride including the Chinese-American Cook. The album also shows views of the Painted Desert, the compiler in front of the plane in Rock Springs, Wyoming, where she takes her first plane ride, as well as sitting in the car in front of the US Airmail Service Hangar. In addition, there are views of the auto trek to Yellowstone, the dams along the way, feeding the bears, and even the Buick driving through the heavy brush. She apparently owns a 1927 Auburn 8-95 Coupe afterwards and visits include Petaluma, California, Santa Barbara, and Pocatello, Idaho, with a view of the car and a Native American. The compiler consistently refers to herself as me, my, and mine, and makes references to visiting relatives in 1948 after the War in Germany, as well as a Sonnichsen relative released from Russian POW camp in 1948, but no indication of her name. Minor rubbing and edgewear along with minor wear to some of the leaves. A very good exemplar with all the photos retaining bright strong contrast.

European Trip Photograph Album With Hand-Drawn Maps Of …
by Anonymous