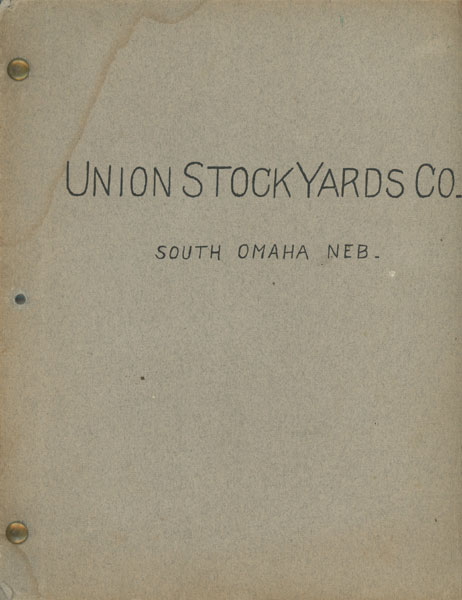 A photo album of 15 silver gelatin photos depicting the nation's largest livestock market and meat facility, that of the Union Stock Yards Co. at South Omaha, Neb. Each of the photos has a typewritten caption underneath. All photographs measure 4 1/2" x 6 1/2" and are mounted on gray construction paper. "In 1882 Alexander Swan, a Wyoming rancher who had emigrated from Scotland, urged Omaha business leaders to consider creating a stockyard. He and other ranchers, including C.R. Schaller, an English immigrant, argued that shipping cattle the additional 500 miles to Chicago caused them to lose weight and lowered profits. They noted that Omaha was a transportation center served by both the Union Pacific Railroad and Missouri River freighting. The Missouri also provided the water and drainage needed for a stockyard, and they also praised the Omaha area’s abundant corn and grass. The city, they contended, could supply everything needed to care for and fatten cattle. In 1884 a group of investors built cattle pens on ten acres south of the city. Soon meat-packers, starting with G. H. Hammond in 1885, began building processing plants adjacent to the yards, and the Omaha stockyards grew quickly as the number of animals processed there increased. In 1886 the investor group built the Livestock Exchange building, and more meatpacking companies set up shop, including the Fowler Brothers in 1886 and Armour-Cudahy and Swift in 1887. By 1890 South Omaha was the hub of a burgeoning western meat industry." Founded in 1883 the Union Stockyards of Omaha became a fierce rival to Chicago's Union Stock Yards and became the third largest for production by 1890. By 1947 they were second to Chicago or any other stockyards in the world and by 1955 they were the nation's largest livestock market and meat packing industry. They held that title until 1971. In 1999, after 116 years the yards closed. The photographs include: 1) Exchange Building and Stock Yards National Bank; 2) At Scale House #9, Cattle Which Have Been Sold and Are Ready to Be Weighed Out; 3) Delivering Cattle After Weighing Out; 4) From The Roof Of The Sheep Barn; 5) Lower End of the Yards. Foot Walk Runs Full Length of Yard; 6) At The Right Is Shown The Unloading Dock Fo Sheep and Hogs. Cudahy Plant In The Distance; 7) Unloading Docks at Upper End of Yard Used In Busy Season; 8) Lookin N.W. From O Street Viaduct. Yards Lie to the Left. Arrow Indicates Dividing Line Between the Tracks of U.P.R.R. and Stock Yards Co. The Supply Yard Extends Along the Left to the L Street Viaduct in Distance: 9) Looking Toward O Street Viaduct From Q Street Viaduct In Course of Construction; 10) Private Road Leading to Cudary Plant. A Switch Track Crosses Where Indicated; 11) At L Street. A Single Track owned by the Stock Yards Co. Crosses at Point Indicated; 12) Shows The Crossing at I Street (Cooperage Co. in photo.); 13) F Street Crossing. The Three Tracks Indicated Are Owned and Used By The Stock Yards Co. Round House Is Located 300 Yards To The Right. 14) A Group of Brakemen at the Yard Master's Office; 15) One of the Six 75 Ton Locomotives With Crew. Album covers have minor damp staining which also affects the first several leaves of the album, but does not affect any of the photos. Photos have great contrast. Very good.

Riding Behind The Padre. Horseback Views From Both …
by Richard Collins