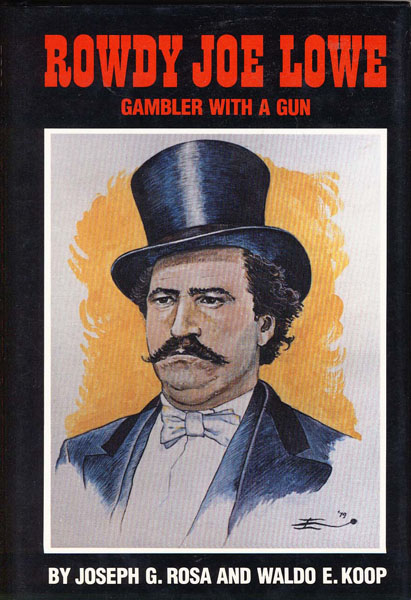 First edition. 8vo. Cloth, xviii, 188 pp., preface, acknowledgments, introduction, illustrated, bibliography, index. Splendid biography of the man who attracted trouble the way a magnet attracts iron. Originally from Illinois, Joseph Lowe and his wife Katherine moved to Kansas following the Civil War. In 1871, the couple moved to Newton, Kansas, where they set up a saloon and brothel. In 1872, Kate went off with a gunman to visit a competing brothel. Joe found out and shot the man. The controversy forced the pair to relocate to the Wichita area where they bought another saloon in Delano, Kansas. This business venture that at first was extremely profitable. On October 27, 1873, Lowe shot and killed fellow saloon owner Edward "Red" Beard after Beard stormed into his saloon shooting at one of Lowe's "girls." After numerous complaints of cheating and under-handed card deals, Lowe's business began to suffer. The couple moved to Texas, occasionally working in saloons in numerous towns until on February 11, 1899, Lowe was drunk in the Walrus Saloon in Denver, Colorado. He began insulting policeman E.A. Kimmel, who drew his pistol ad killed Lowe. Rowdy Joe Lowe is a view into the smoke-filled saloons, brothels, and gambling halls of the old west. Fine in dust jacket.

John Udell, "The Rest Of The Story: " …
by Jack Beale. Smith

Suzanna. A Romance Of Early California.
by Harry Sinclair. Drago

Soda For The Sourdoughs
by Fern K. Nelson