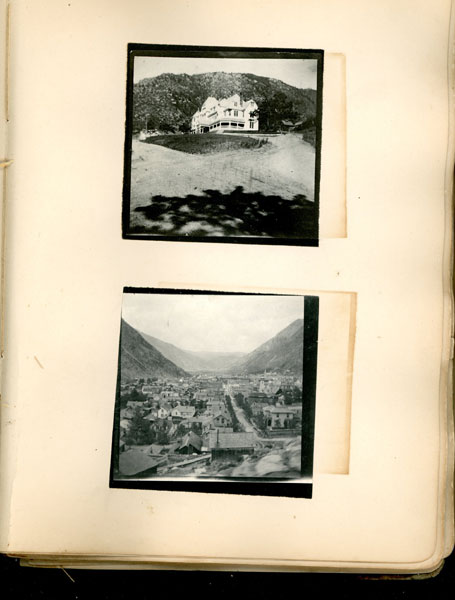 Photograph album. 4to. 11 1/4" x 8 1/2" Quarter red leather and black cloth binder with 255 mounted photographs, albumen prints, silver prints, platinum prints, bromide prints and cyanotypes; one mounted folding brochure with a map of Estes Park; various newspaper and photographic clippings. A delightful photograph album documenting visits to Estes Park, Colorado, in the region that became Rocky Mountain National Park twenty years later. Estes Park serves as a base for the Rocky Mountain National Park (est. 1915), situated between the towns of Estes Park to the east and Grand Lake to the west, whose creation was spearheaded by the American naturalist, author and homesteader Enos Mills (1870–1922). The present album documents outings in these parts undertaken by an unidentified couple and their friends primarily in 1895 and 1896, and shows a portion of the National Park before it became officially designated as such. A number of the earliest images in the album show Long’s Peak House, a cabin erected in 1880, with the Peak visible in the background. Many of the images immediately following record men hunting and fishing, presumably in the Long’s Peak area. In two images hunters are shown descending from elevations with beheaded animal carcasses (possibly pronghorns?) hanging across their chests. In several photographs we encounter members of the party chowing down around a campfire, trudging through snow, casting for trout, etc. Various candid portraits are included, many of which center on what appears to be a newlywed couple whose son later provided inscriptions, such as "Mother + Father 1895." Judging by one photograph and the son’s inscription, it seems his mother’s maiden name was Crocker, which may tie her to the Crocker Ranch in Estes Park, which is still standing. His father’s initials appear to be A.E.P., which he shares with his son. One picture is included of a baby, beneath which the son has written, "AEP his majesty himself 1896." A lively cavalcade, which likely took place in the town of Estes Park, is documented, including one photograph of Native Americans on horseback with a chief in headdress. Several photographs capture Elkhorn lodge and various other lodges, and a handful of views document the town of Estes Park proper. Other photographs show gold mining operations and bear inscriptions reading "Portland G.M. Co. Gold Mining Teller County, CO" and "Moon Anchor GM CO Cripple Creek Gold Fields." One Mr. Sherwood is pictured in several of the photographs who likely had ties with the Sherwood Hotel in the park. A number of photographs at the end of the album were taken at Glenwood Springs, one showing a group of men swimming in the resort pond. Included are several newspaper clippings and a brochure of Estes Park Colorado, complete with a map of the park and information on hotels and boarding houses, how to reach the park, and other related matters. To this day the park is one of the most visited in the National Park System, ranking as the third most visited U.S. national park in 2015. Most of the photographs in the album are snapshots, but also included are three large commercial images by F. E. Baker of Greeley, as well as two similar unsigned photographs that appear to be his work. An appealing photographic record of the region that would later become the Rocky Mountain National Park. Red leather chipped and worn, corners worn, spine is perished but holding, covers and contents loosely held together, photographs are generally in good condition with most being with moderate to strong tonality.