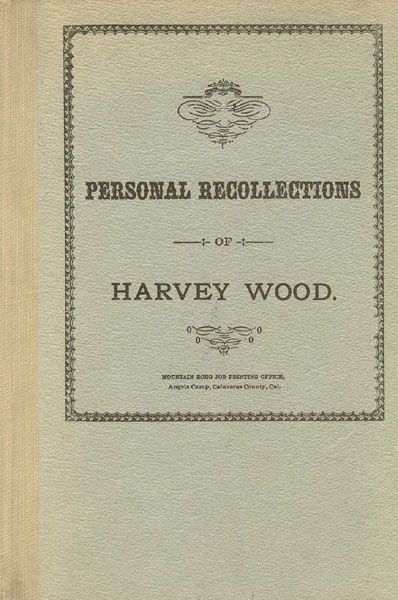 Personal Recollections Of Harvey Wood. With An Introduction And Notes By John B. Goodman Iii

Other works by HARVEY WOOD

First edition thus. Limited to 200 signed and numbered copies, of which 100 are for sale. This is copy 98. 8vo. Two-tone quarter cloth and printed paper over boards, xxiv [4], 27 pp., maps on endpapers, note, introduction, illustrated, facsimilies, maps, footnotes. Memoirs of one of the first of the 49'ers. He journeyed from New York to the California gold fields as a member of the Kit Carson Association. They traveled overland from Galveston, Texas to Chihuahua, Mexico, then north into Arizona to the Gila River and on to the Colorado River. He arrived in the gold fields of California in August 1849, becoming the first person to settle permanently at Robinsons Ferry, and there spent the rest of his life. The original edition of 1896 was printed by the Mountain Echo Job Printing Office, Angels Camp, California. Only 12 copies were printed. This edition, with much added material, was printed by Grant Dahlstrom for members of the Zamorano Club of Los Angeles as a keepsake from John B. Goodman. The original prospectus and order form are laid-in. Fine copy. MINTZ 623. KURUTZ 694b. COWAN VOL II p.686.

Murder On The Santa Fe Trail. An International …
MARC SIMMONS