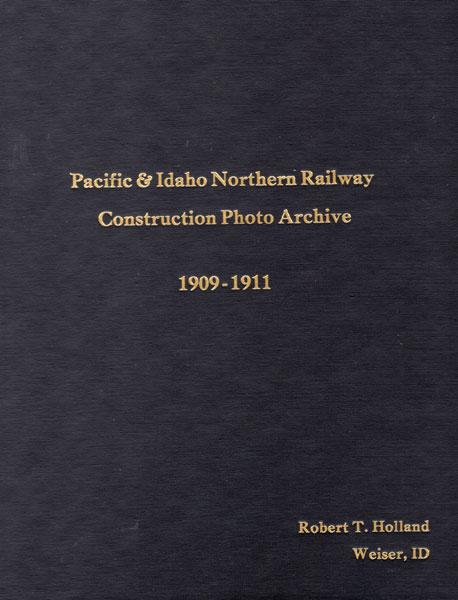 First edition. Black cloth three-ring notebook with titles stamped in gold gilt on the front cover. An exceptional archive of 97 photographs, Real Photograph Postcards, and Cyanotypes documenting the construction of the P & IN Ry along the Weiser River from Milepost 76 north of Glendale, ID to New Meadows, ID, and then the scenic Payette Lake area. These images include locomotives, engineers, survey crews, sternwheelers, excursions on RR hand cars, massive steam shovels in operation, and more. Archive of 67 original photographs sized 3 1/2" x 5 1/2," 29 Real Photograph postcards (3 cyanotypes), sized 3 1/2" x 5 1/2," 1 color linen postcard, 9 with ink annotations, pencil annotations, and notes on versos. These uncommon photographs & cyanotypes offer an extraordinary view of the construction of the Pacific & Idaho Northern Railway, a successful shortline railroad which had purchased the rights and interests, including surveys, grades, and right-of-way of the Weiser, Idaho & Spokane Railway in 1899, later sold in 1914 to the Oregon Short Line Railroad. By 1909, the P&IN Ry was beginning the construction from Evergreen, Idaho to New Meadows, Idaho where the company was establishing the New Meadows Depot, which would allow the P&IN Ry to serve as a "farm-to-market" railroad. In addition, they were operating six Baldwin4-6-0steam locomotives (four of them new), Nos. 100-105. These excellent photographs show surveyors at work, engineering crews, steam locomotives, supplies being hauled in by sternwheelers and horse-drawn covered freight wagons, grading, and laying of railroad ties, temporary corduroy log railroad track beds over water, construction of dikes, railroad trestles, and more. Many of the photos show Edwardian-era "Western" women riding the railroad construction hand cars, hamming around with the survey and track building engineering crew, shooting rifles, and posing for the photographer. Notes on the back of several of the photographs and postcards provide invaluable identifying details to the participants, especially the civil engineers and survey crew contracted with the J. G. White & Co., Inc. out of New York. Those identified include the project's chief engineer was Stuart Macaulay French (1878-1961), civil engineer who directed railroad building and irrigation projects for J. G. White & Co. from 1909-1920, before leaving for Seattle, and Sedro Woolley as mining engineer; Karl L. Keyes (1880-1972) a local civil engineer based out of Weiser, ID who began his career with the Chicago, Milwaukee & St. Paul RR, and then contracted for the P&IN Ry project; Howard McClymonds Yost (1885-1966), civil engineer who specialized in concrete work, road building, and later with U.S. Army; Charles B. Shirley, Jr. (1890-1963), a Weiser, ID surveyor, who later became a banker; Harry Spooner (b. 1875), accountant with the Oregon Short Line RR, and the P&IN Ry in Weiser, as well as the survey Levelman A.W. Bainbridge (fl. 1900-1920), surveyor and engineer out of Colorado Springs, and later Los Angeles, CA. Holland (b. 1892) was a young Vermonter whose family worked as engineers and surveyors with the Central Vermont Railroad, who went West to Idaho where he worked on the track building project for the P&IN Ry, later with the Lehigh Valley Railroad, and serves with the 13th Engineers Construction Battalion, and later 143rd Co. Transport Engineers with the A.E.F. during and after World War I. Two of the postcards included in this group were mailed to his older sister Joanna Florence Holland (1889-1925), a Vermont public school teacher. Most of the photos have strong contrast with a few sepia-tinted images with minor fading, overall a collection in near fine condition. See: Don Strack, Pacific & Idaho Northern Railway Overview, Utah Rails (2010); The Progress of Sub-Division in Idaho under the Carey Act, The Irrigation Age, Vol. XXIV, No. 1, pp. 55-56; Hiram Taylor French, History of Idaho: A Narrative Account of its Historical Progress (1914).

Out There, Essays On The Lower Big Bend
by Ben H. English

Answers To Your Travel Questions About Mexico, The …
Mexican Tourism Department