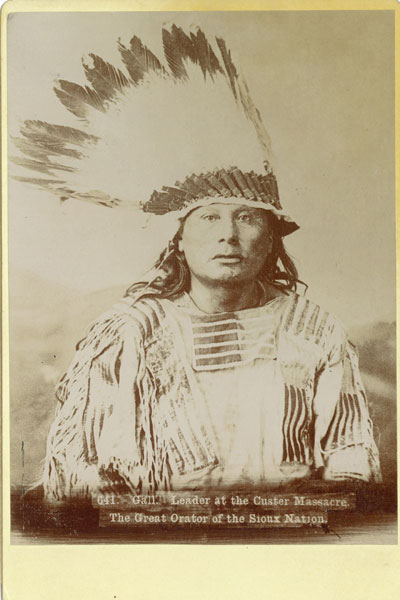 6.5" x 4.5" cabinet card image of "Gall, Leader at the Custer Massacre. The Great Orator of the Sioux Nation." A rare image of this important Dakota warrior, leader, and chief. Along with Sitting Bull and Crazy Horse, Gall resisted efforts by the U.S. Government to annex the Black Hills. Gall, enraged by the slaughter of his family, led the charge across Medicine Tail Ford to attack Custer's main forces on the other side of the Little Bighorn River. Afterwards Gall accompanied Sitting Bull, escaping to Canada where Gall remained until November, 1880. Gall was first photographed by D.F. Barry at Ft. Buford in northwestern Dakota Territory in 1881. Later known images by D.F. Barry and others date to 1888 and 1894. These later images show a somewhat heavier Gall with a distinctive scar appearing on his chin. The photograph offered here is clean and clear and the scar on his chin appears to be fresh and unhealed, unlike the published later images. The photographer, William R. Cross had a studio in Hot Springs, S.D. and Niobrara, Nebraska, and is known to have done "field-work at the Dakota Reserves." Gall lived on the Standing Rock Reservation from 1881 until his death in December, 1894. The back of this cabinet card is printed: "Photographic Artist. Cross. South of Post-Office, Hot Springs, S.D. Views and Portraits." A fine, exceptional, and rare image of this important Hunkpapa Dakota warrior and chief.

Robbing Banks Was My Business. The Story Of …
J. EVETTS HALEY