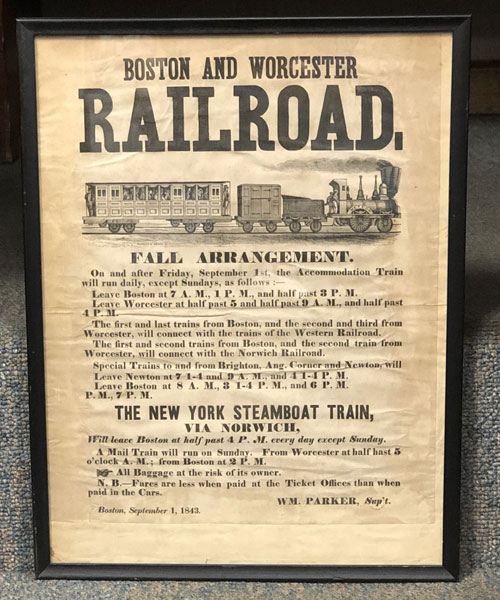 Original Broadside Of The Boston And Worcester Railroad

Other works by PARKER, WILLIAM

First edition. 11 1/2" x 14 3/4" broadside announcing their "Fall Arrangement" of schedules. Dated September 1, 1843, and signed in print by William Parker, Sup't. this piece features an illustration of their locomotive the "Meteor" (built by George Stephenson, the English railroad pioneer) pulling a loaded passenger carriage. The text notes the schedule and its connection to a steamboat train at Norwich, Connecticut for the completion of a trip to New York (via New London and Long Island Sound). Before the advent of this modern transportation, such a trip was far more arduous and lengthy. This announcement is pasted onto two other documents (together which are a little larger), one is a blank bill of lading document (actually two documents printed on a single sheet, illustrated with both a train and a steamboat), the other a contemporary blank legal document of no particular relevance. Framed with glass on both sides; overall about 13" x 17" and in very good condition. Rare.

Dr. Goodfellow. Physician To The Gunfighters, Scholar, And …
DON CHAPUT