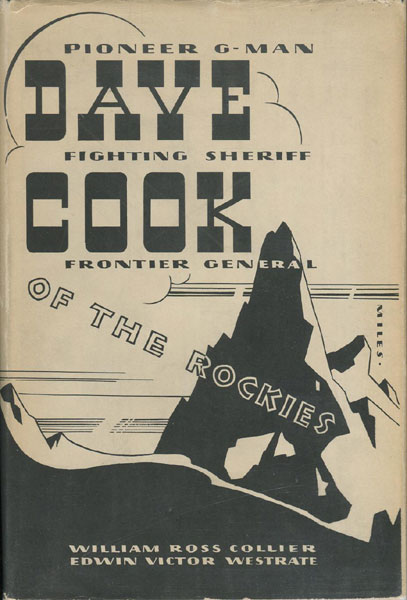 Dave Cook Of The Rockies, Frontier General, Fighting Sheriff, And Leader Of Men.

First edition. 8vo. Cloth, xv [1], 224 pp., frontis. [portrait of General David J. Cook], acknowledgment, introduction, illustrated. In 1859 Cook went to Colorado during the gold rush. He guarded supply trains during the Civil War, became city marshal of Denver, was sheriff of Arapaho County, was a United States marshal, was General of the Colorado Militia, and founder and Chief of the Rocky Mountain Detective Association. During his 40 year career he arrested more than 3000 criminals, including 50 murderers. "A history of this famous Colorado detective, with an extended account of the capture of Musgrove and his gang, as well as other outlaws."---Ramon Adams. Most of the historic photographs in this work were hitherto unpublished and taken c. 1880 by Joseph Collier. Fine, bright, tight copy in price-clipped dust jacket with light wear to spine ends and the extremities.

I Arrested Pearl Starr And Other Stories Of …
by Mike Gordon

They Called Him Buckskin Frank
by Jack; Parsons, Chuck Demattos

Crime Of 1873, The Comstock Connection
by Robert R Van Ryzin