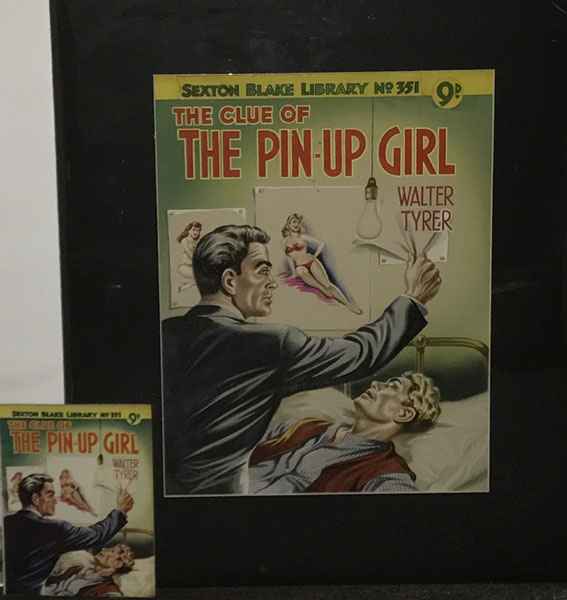 Original Artwork For "The Clue Of The Pin-Up Girl". A Sexton Blake Library Title

Original 11 1/2" x 15" colorful image, tastefully matted to 18 1/2" x 22" size. Included with the artwork is a copy of the actual book written by Walter Tyrer and titled The Clue Of The Pin-Up Girl and is Sexton Blake Library publication number 351, a digest-size paperback original. Sexton Blake is a fictional character, a detective who has been featured in many British comic strips, novels and dramatic productions since 1893. Sexton Blake adventures were featured in a wide variety of British and international publications (in many languages) from 1893 to 1978, comprising more than 4,000 stories by some 200 different authors. Blake was also the hero of numerous silent and sound movies, radio serials, and a 1960s ITV television series. The first issue of The Sexton Blake Library was published on 20 September 1915, entitled "The Yellow Tiger" and written by G.H. Teed. Sexton Blake was known as "The Poor Man's Sherlock Holmes," and many of the Sexton Blake stories rival the Sherlock Holmes stories in their quality, yet Holmes has remained in the public eye while Blake has been allowed to slip into obscurity by all except for a few devotees. This is a fine, bright piece of original artwork, suitable to be framed.

Good Me Bad Me
ALI LAND

The Roaring Of The Labyrinth.
CLIO GRAY