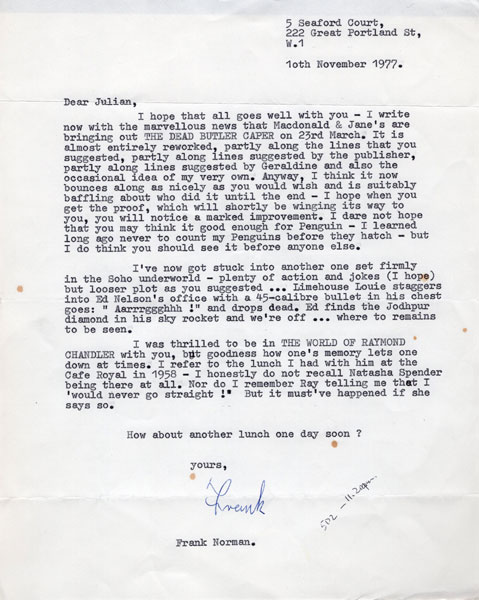 Norman had three mysteries published beginning with The Dead Butler Caper in 1978, and ending with The Baskerville Caper in 1981, which was published after his death in 1980. He thanks Symons for his suggestions of The Dead Butler Caper that enabled the book to finally get published. He further comments "I was thrilled to be in "The World of Raymond Chandler" with you, but goodness how one's memory lets one down at times. I refer to the lunch I had with him at the Cafe Royal1958-I honestly do not recall Natasha Spender being there at all. Nor do I remember Ray telling me that I "would never go straight!" But it must've happened if she says so." Letter is signed "Frank." Very good copy.

In The Heat Of The Night.
by John. Ball

The Minus Man.
by Lew. Mccreary

The Crouching Beast. A Clubfoot Story.
by Valentine. Williams