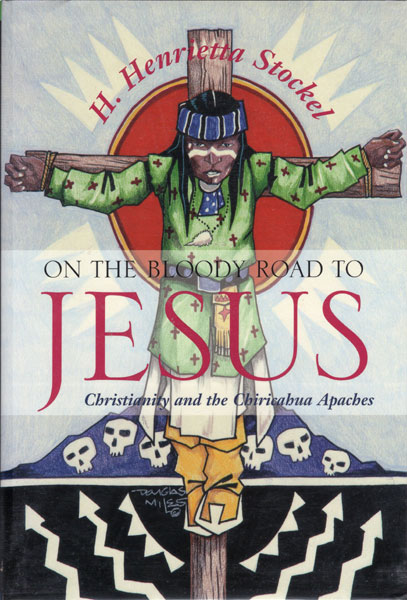 On The Bloody Road To Jesus. Christianity And The Chiricahua Apaches.

First edition. 8vo. Black cloth, magenta colored gilt stamping on the spine, xxi [blank], 314 pp., frontis. [painting of Christ as an Apache], acknowledgments, author's note, preface, introduction, illustrated from photographs, map, notes, bibliography, index. A study of the rich religious legacy of the Chiricahua Apaches and its inevitable collision with Christianity. Beginning with Apache creation stories, the author describes Chiricahua beliefs and ceremonies before going on to recount the conditions of the Spanish colonial frontier at the moment of conquest. Subsequent chapters trace events that culminated in the surrender of the Chiricahua Apaches in 1886, the twenty-seven years of incarceration as American prisoners of war in Florida, Alabama, and Oklahoma, and the life-changing consequences of the children's education in government-sponsored boarding schools. According to the author, the Chiricahua Apaches never completely surrendered their traditional religion to Christianity in order to protect themselves from forced extinction. as new, unread copy in dust jacket.

When The West Was Young. Historical Reminiscences Of …
by John D. Higinbotham