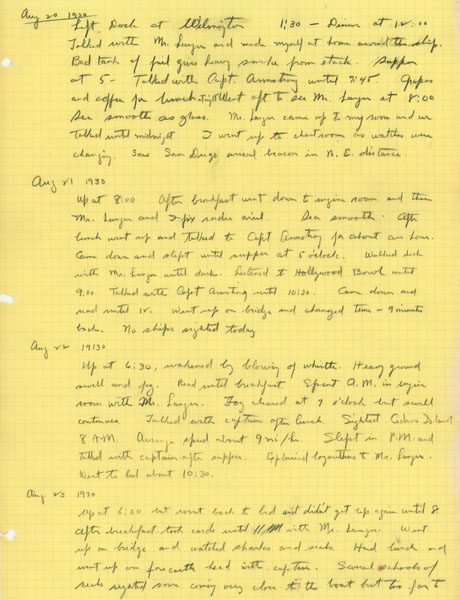 Manuscript Diary Of A Twenty-Three Day Voyage From Los Angeles To New York Via The Panama Canal Written In 1930 By Thurston H. Ross, An Engineer On The Oil Tanker M. V. Australia

Other works by THURSTON H ROSS

Legibly written in pencil on 8 1/2" x 11 inch graph paper, six loose pages of diary entries from August 20 through September 11, folded with two other pages in a University of Southern California envelope with "Diary of Trip on Australia" written on the front. One of the two non-diary pages has "Thurston H. Ross / Old College Bldg – Room 112 / 3551 University Ave" printed in ink at the top. Thurston H. Ross was a real estate appraiser and economist who flew for the Signal Corps during World War I and served as a strategist for the Joint Chiefs of Staff during World War II. He came to Los Angeles after the war, earned master’s and doctorate degrees at USC and also taught there. In 1927 he established USC’s first course in real estate appraisal. Ross is listed as an Assistant Professor there as early as 1924. The 1940 census finds Ross and his wife, Bertha, living in Venice, California, with their 18-year-old son. Their son, Thurston H. Ross, Jr., became a well-known dentist in southern California. From the 1930 diary entries, it appears that Ross was working in the engine room of the M. V. Australia during this voyage. There are several references of him being in the engine room, working on the boiler and caulking boiler studs, cutting a lead bottom for a canvas bucket in the shop, and repairing the Worthington engine which broke down and “left the ship dark and out of control for about five minutes. Telegraph signal from engine room got me awake.” (Sept 1, 1930) The 530 foot-long M. V. Australia was built in 1928 and was sold to Texaco as a tanker to carry petroleum products. On March 16, 1942, she was torpedoed by a German U-boat near Diamond Shoals off of Cape Hatteras. The initial explosion killed several men in the engine room, but the rest of the crew made it safely into lifeboats and were picked up by a passing ship. The wreck of the ship was impeding shipping lanes, so it was used as a target for bomb drop training by U.S. military pilots during WWII. Today, the wreck is a popular dive site. In this 23-day diary account, Ross begins with the ship leaving the dock at Wilmington (now a part of Los Angeles, California) and continues on through the Panama Canal into the Caribbean and up the Atlantic coast to New York harbor. His entries are a mix of describing his work on board, enjoying the company of Captain Armstrong and other crew members, playing cards and chess, spotting sea-life, passing ships, viewing the coast line and islands enroute, and his impressions of arriving in New York. Sample entries include: Aug 23, 1930: "Went up on bridge and watched sharks and seals. Had lunch and went up on forecastle head with captain. Several schools of seals sighted, some coming very close to the boat but too far to photograph. Also saw hammer head shark and flying fish… About 1 PM sighted ship on horizon in the east. Captain thought it was a Dollar liner but too far off to tell for sure… Fire and boat drill at 4 p.m." Aug 25, 1930: "Engine room in morning. Took more cards on #1. Started engine which clicked badly on account of lack of fuel. Adjusted back valve to admit more fuel. Crew painting stays from boatswain’s chairs. Land visible on port side… In afternoon while I was in engine room for a few minutes a rain squall washed out my bunk so the boy had to put new bedding in." Aug 27, 1930: "Saw turtles today with birds riding on their backs." Sept 1, 1930: "Fine clear day close to shore. Took photos of Juanita Island and Manito Point, both in Rep. of Panama. Tropical vegetation has a characteristic odor. Dolphins leap out of sea and cormorants ride by on driftwood." Sept 2, 1930: "Went thru the Canal. Started at about 7 AM and came out at about 4:30. Took on stores from commissary boat at Christobal… Dropped anchor in Balboa about half an hour before doctor and pilot came aboard. Not much shipping on canal and general appearance and maintenance of canal inferior to last trip. Engines off as we drift from Colon out to breakwater but the passage safely negotiated. Hurricane warning given at Colon…" Sept 3, 1930: "We have a bunch of bananas in the pantry next door and they have an excellent flavor – only a day off the tree. Played chess with Mr. Barry in evening and read." Sept 4, 1930: "Swell has about subsided and the island of Haiti is seen… We pass within 6 mi. getting an excellent view thru the glasses of tropical woodlands and two or three towns… Shortly afternoon Cuba comes into sight and for several hours we see both islands, a condition said to be rare here…" Sept 10, 1930: "Expect to arrive N.Y. this evening. Capt wants Chief to speed up so as to get in before dark to a good anchorage. Several ships are visible at a time, many inbound. We ran a tanker all day for anchorage advantage and keep our lead. Lights on shore look good. At about 8 o’clock we close on channel but it will be dark when we come to anchorage. Capt takes pilot to get a better anchorage… Long Island bright on starboard bow. Statue of Liberty a dull glow. Come to anchorage after much maneuvering off Stapleton at 11:30. Barges alongside and connected up at midnight. My last night on board…" Ross spent the next day in New York, visiting First Trinity and Grace churches and having breakfast at the Pennsylvania Hotel. Then, he writes, as his last entry, "Spend a rather fruitless and tiresome afternoon running around the squalid city of New York. Call on McGraw Hill and sign a contract for Real Estate Appraisal. Leave via Crescent Limited at 8:40 for New Orleans. Awoke to see Philadelphia, Baltimore and to cross Potomac in Washington – altogether too many memories!" Interesting 1930 account of an oil tanker voyage between Los Angles and New York, by way of the Panama Canal in very good condition.

On The Plains
VARIOUS AUTHORS