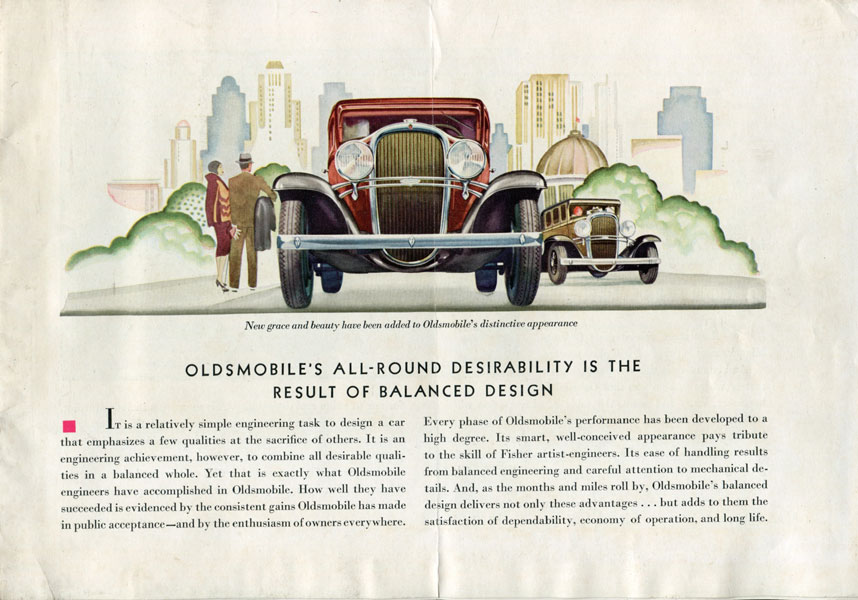 Oldsmobile's All-Around Desirability Is The Result Of Balanced Design. The Oldsmobile Six

First edition. 8" x 11 3/4" oblong color pictorial wrappers, 24 pp. (including covers), illustrated in color, information, and specifications. Oldsmobile says that the 1931 vehicles are offering important new features in body, engine, chassis, and lower prices. Some of the new features include Syncro-Mesh transmission with quiet second gear, down-draft carburetion, carburetor-silencer, and air cleaner, improved body insulation, a deeper, sturdier frame, etc. A detailed chart that shows vehicle improvements 1928 through 1931. Vehicle types offered for 1931 are the two door sedan, the four door sedan, the sport coupe, the business coupe, the convertible roadster, the Patrician sedan, the DeLuxe four door sedan, and the DeLuxe two door sedan, The advantages of the engine, chassis, and accessories are covered in detail. Also shown are artist renderings of the Olds Motor Works factory and the General Motors Proving Grounds. Oldsmobile was a brand of American automobiles produced for most of its existence by General Motors. Olds Motor Vehicle Co. was founded by Ransom E. Olds in 1897. In its 107-year history, it produced 35.2 million cars, including at least 14 million built at its Lansing, Michigan factory. When it was phased out in 2004, Oldsmobile was the oldest surviving American automobile marque, and one of the oldest in the world, after Daimler, Peugeot and Tatra. Faint vertical crease to the center, covers lightly soiled, top corner has a small crease, else a very good copy.