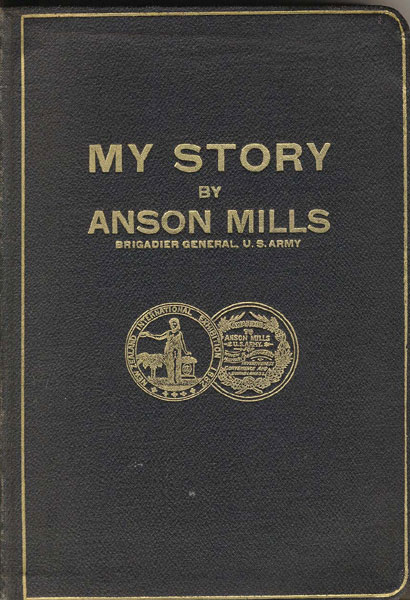 First edition. 8vo. Compliments of the author to Miss Maria B. Hunt. Limp, gilt-stamped cloth, black front and rear endpapers, a.e.g., 412 pp. Numerous illustrations, 3 maps. Preface by General Nelson Miles. Valuable and vivid recollections by Mills of his service in Texas in the 1850's, the Civil War, service in Arizona, Crook's 1876 campaign, and his service in El Paso as Commissioner of the Boundary Commission between the United States and Mexico. His recollections of El Paso and west Texas are particularly noteworthy. Mills recounts his campaigns in the west from 1865 through the Custer campaign of 1876. He was a champion of Custer and accuses Terry of being unfamiliar with Indian warfare. His personal experiences on the Powder River Expedition, at the Battle of the Rosebud, and at the Battle of Slim Buttes are particularly noteworthy. Mills escorted General Dodge on the overland expedition to Oregon in 1867 and performed the same task with Lord Dunraven in 1873. Howes calls for an errata slip, not present in this copy nor the Graff copy. He was also involved in the Black Hills Gold Rush. An exceptionally fine, bright copy.

The Early History Of Motley County
by Harry H Campbell

Resume Of Operations Against Apache Indians, 1882 To …
Brigadier Gen'L George Crook [With Notes And An Introduction By Barry C. Johnson]