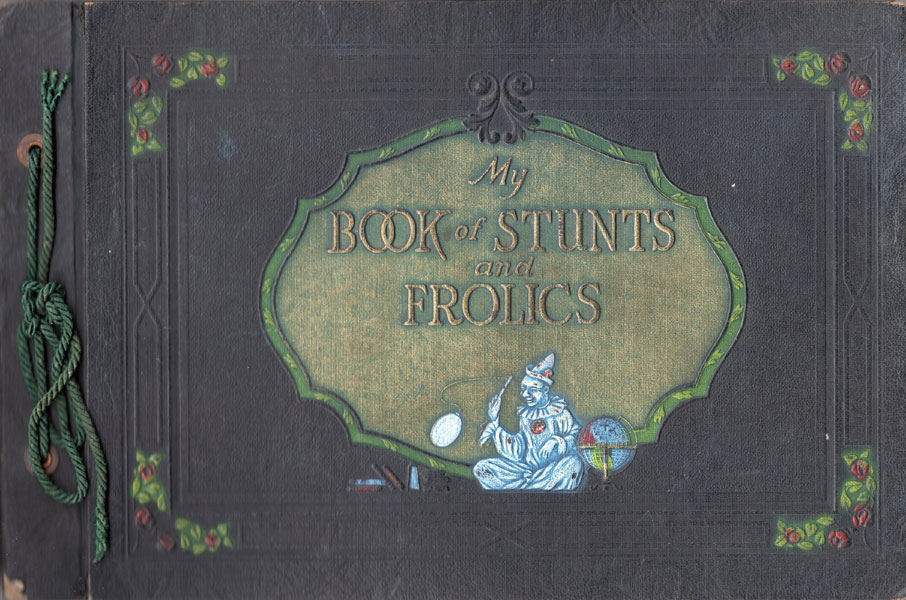 My Book Of Stunts And Frolics

Other works by RHODA LOUISE MEREDITH

7 1/2" x 11" in black cloth pictorial boards with ink color relief design to front. String bound through left margin. Commercial album produced by Marquette Manufacturing Co., Chicago. Printed blank card leaves with sections for: "Stunts and Frolics;" "Social Events;" "Athletics;" "Snapshots;" etc. 44 card leaves; 12 with manuscript entries, some in the same hand, some inscriptions from others; 5 leaves with 29 black and white snapshot photographs mounted to rectos and versos toward center of volume (with 3 additional prints laid-in loose; 32 photographs total), along with mounted clippings, and several pieces of ephemeral scrap adhered or laid-in loose. Approximately half of leaves blank. The photograph album of a Rhoda Louise Meredith (sometimes written as "Louise Rhoda," born about 1915). Census records indicate Meredith was born to a Paul and Leona in Harper County, KS, a rural area about 50 miles southwest of Wichita. The majority of images capture her family life and circle of friends from about 1931-1932 (some slightly earlier), with several views of her High School classmates, along with several pages of inscriptions and and a lengthy manuscript record (likely in her hand) of graduation gifts received. She went on to attend the nearby University of Wichita (later renamed Wichita State) beginning in about 1932 and appears to have graduated about 1935 or 1936 with a degree in education (her original 1936-1937 printed membership card from the Oklahoma Association of Negro Teachers is laid-in). The snapshots are typically clear and engaging throughout, capturing a compact, though evocative, and uncommon vernacular record of African-American life in rural Kansas in the 1930's. In addition, a particularly engaging narrative entry on an afternoon picnic opens the album: “The crowd went on a picnic there were sixteen of us and darling the girls prepared the lunch and the boys looked after the transportation We had loads of fun. The boys got a big truck and we all piled in. We played and sang on the way out. Elms brought his “Uke” and Henry brought his portable Vic. We dance some on Mother Nature’s dance floor of earth by the Victrola. Gee it was keen to dance and frolic way out in the open with trees and grass and sky over head. It rained terribly hard before we got home but that didn’t’ matter we had fun. / The place was wonderful. It was a grove out north of here (Newton) It is simply beautiful – grass, trees, and a brook with running water. The crowd that we have is OK. There are eight couples about town that make you take notice and it’s us! Kinda tough like we know but we can’t help it. After we came home we danced some more on the porch." (Sunday May 15, 1932) Album exterior mildly worn, hinge of top board worn. Overall contents well preserved. An about very good production overall. A revealing visual and written vernacular record of African-American life in the West and of black women's education in the early 1930's.