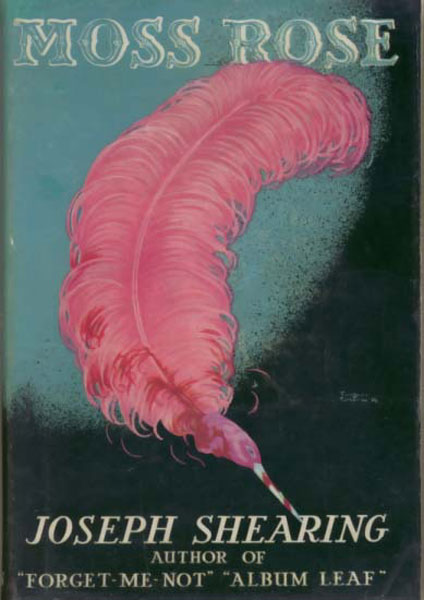 First edition. Light foxing to a few preliminary pages else near fine in professionally restored dust jacket at spine ends, corners, and top edge of rear panel. Pseudonym of Gabrielle Margaret Vere Campbell. This is one of the author's many fascinating novels based upon actual murder cases using her own interpretations as to what actually happened and who was really guilty. MOSS ROSE is based upon an 1872 murder of a prostitute named Buswell, which was never solved. Belle Adair, is the young woman "of good birth and education but quite ruined in reputation," who knew the truth of what the police had to dismiss as "an unsolved mystery." "How she used her knowledge and silence and her power over the murderer to re-enter the society to which she had been born, and to lift herself from degradation, is the theme of Mr. Shearing's novel." Additionally the movie of the same name, a film noir selection, was issued in 1947 by Twentieth Century-Fox and directed by Gregory Ratoff. The film starred Peggy Cummins as Belle Adair aka Rose Lynton, Victor Mature, Ethel Barrymore, Vincent Price, Margo Woode, George Zucco, Patricia Medina, and Rhys Williams. 20th Century Crime & Mystery Writers says, "Although these are not feminist novels, they often show Victorian women bored by narrow interests, incapable of self-preservation, held down by male authority, and Shearing is very successful in establishing a tone of brutal sexuality without recourse to explicit detail. Yet many of her "strong" women, are unsympathetic, calculating, and manipulative." A selection of Kevin Johnson's THE DARK PAGE, and an exceptional copy. THE DARK PAGE p. 220 & 221.

The Smell Of Fear.
by Raymond. Chandler

The Haunted Abbot.
by Peter. Tremayne

The Case Of The Curious Bride
by Erle Stanley Gardner