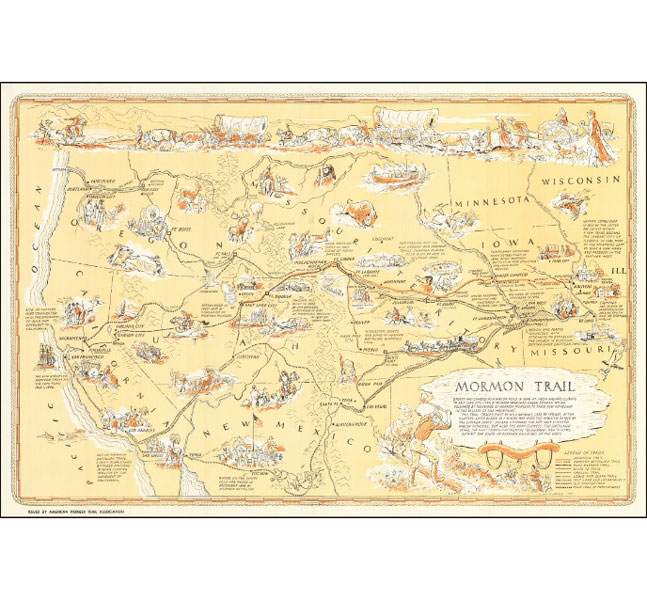 Other works by J. RULON HALES

First edition. 20 1/2" x 30" sheet printed in yellow, orange and black. A charming pictorial Mormon trail route map, full of historical tidbits. A commemorative map funded by the Burlington & Quincey Railroad Company to celebrate the centennial of the Mormon settlement of Salt Lake City and the Great Basin. In addition to showing the route of the Mormon Trail, this map also marks the Mormon Battalion Trail, Pony Express Trail, Santa Fe Trail, Lewis and Clark Trail, Salt Lake and Los Angeles Trail, Old Spanish Trail, and Main Trail for Forty-Niners. Opened and charted as a wagon road in 1846-47. From Nauvoo, Illinois to Salt Lake City, Utah by pioneer vanguard under Brigham Young. Followed by thousands of Mormon Pioneers to their new homeland in the "Valleys of the Mountains." This trail - traced first by wild animals, used by Indians, by fur hunters, later blazed as a wagon way over the Wasatch Range by the Donner Party - became a highway for not only covered wagon pioneers, but also the Pony Express, the overland stage, the first transcontinental telegraph - and to some extent the route of pioneer railroads of the west. No folds. A few small bumps at the head. Very good plus.