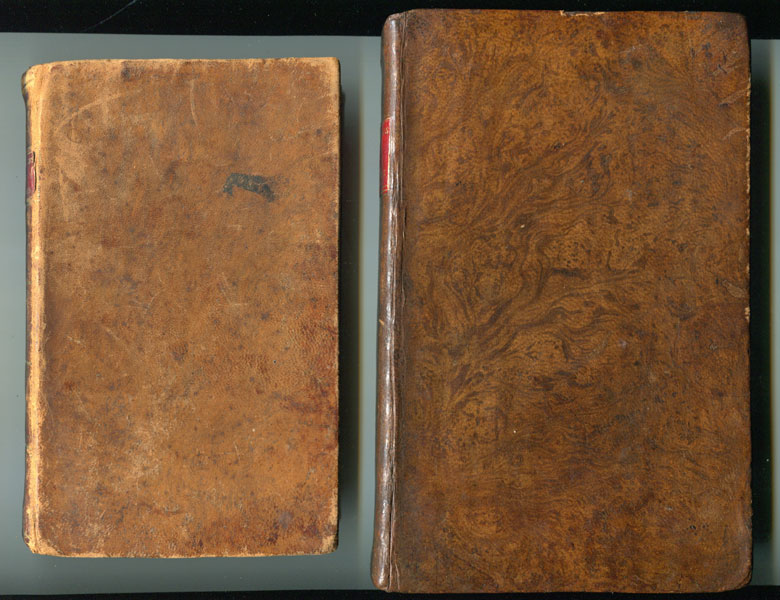 Two Volumes. VOLUME I: First edition. 8vo. Original tree calf, [2], vi - vii, [8], 296 pp., errata at bottom of page 296, title in red leather on spine. Bookplate of William L. Clements Library of American History at the University of Michigan on front pastedown sheet, top edge of title page repaired with old paper, name in ink of Charles Miller, Feb. 14, 1848 on title page, small hole on pages 111 and 112 affecting a few letters, minor foxing throughout, else a very good copy of an exceedingly rare book.VOLUME II: First edition. 16mo. Original calf with title in gilt on red leather label on spine, five gilt bands on spine, 202 pp., former owner's name on front pastedown sheet, water stain to bottom third of front endpapers and title page, moderately rubbed to spine ends and extremities, else a very good copy of an exceedingly rare book. Burroughs (1765-1840) was born in Hanover, New Hampshire, the son of a Congregational minister, and quickly gained a reputation as a troublesome child. Streeter says, "One of the great criminal autobiographies, and an important piece of picaresque Americana." Prior to his reformation, Burroughs was a privateer, posed as a ship's surgeon, impersonated a clergyman, was involved in counterfeiting, escaped from jail in Northampton by burning it down, was arrested and imprisoned on Castle Island, from which he escaped and fled to Canada, where once again he became involved in counterfeiting. He later became a teacher and was arrested for attempting to seduce one of his female students, and was found guilty by trial. His sentence was to receive one hundred and seventeen stripes on the naked back, stand for two hours in the pillory, sit one hour on the gallows with a rope around his neck, and then be confined in prison for three months, and after being released he must procure bonds for good behavior and pay the charges of prosecution. He suffered about two thirds of his punishment before escaping. Later in life he reformed, joined the Catholic Church, and became a beloved teacher to privileged youth. Shaw & Shoemaker 5957 say they can locate only three

He Rode With Butch And Sundance: The Story …
by Mark T. Smokov