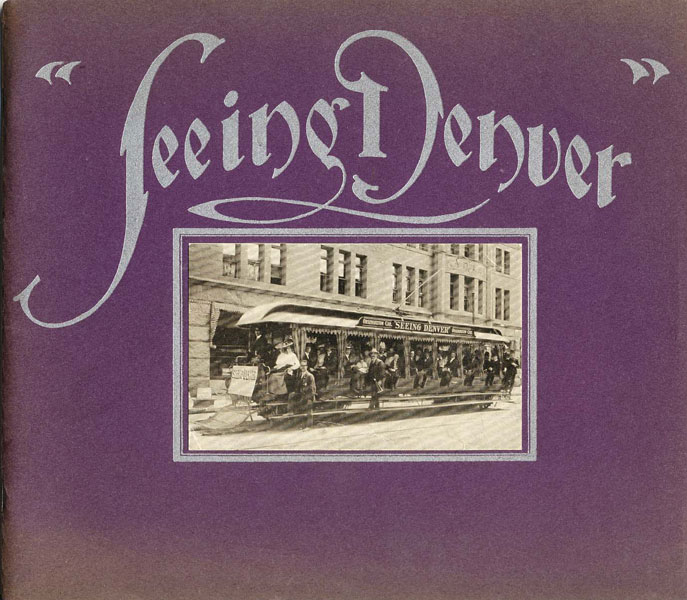 by The American Sight-Seeing Car And Coach Company

First edition. 8" x 9 1/2" oblong, purple wrappers with a mounted view of an open sided excursion car, titles in silver gilt on front and rear covers (both inside and out), 61 [11] pp., illustrated, maps, advertisements. The writer of this booklet says it best, "This will treat of two subjects. The first portion will be devoted to a description of the points of interest in Denver, with high art illustrations, just as they appear from the famous trips of "SEEING DENVER" cars, which are operated every day in the year. The latter half of the book will be a succinct summary of the vast, new and rich region tributary to Denver, the rapid development of which is irresistibly raising her to a position as one of the four great cities of the United States ---- New York, Chicago and San Francisco being the other three." At the center is a double view of Denver in 1902. At the back is a color map of the Columbus Consolidated Gold Mining Company's properties and surroundings, along with an invitation to make an investment in a stock purchase. The American Sight-Seeing Car and Coach Company were made available at the Brown Palace Hotel in Denver. Pictures of the Brown Palace Hotel, the Denver Club, the McPhee Building, Markham Hotel, Albany Hotel, Equitable Building, Ernest & Cranmer Building, Union Depot, New Union Hotel, Tabor Opera House, Mining Exchange, the Tramway Loop, Arapahoe County Court House, and much, much more. A history of Colorado, Denver and surrounding areas is provided along with numerous views of all areas. A choice item with wonderful photographs and views of Colorado, Denver and areas near-by to Denver. Fotografs by the Smith-Hassell Co.; Presswork by the Carson-Harper Co.; Engravings by Frank Reistle; and Manuscript by W. E. Bridgman. Fine copy.