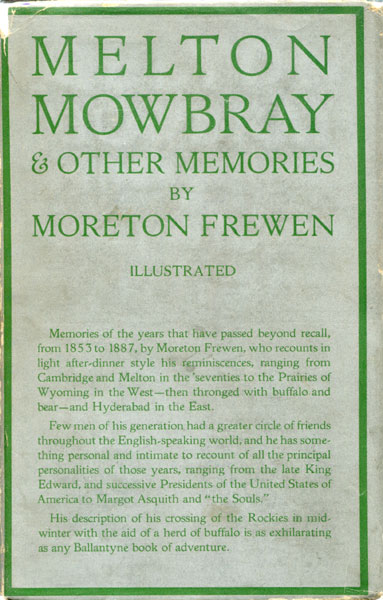 Melton Mowbray And Other Memories.

First edition. 8vo. Cloth, frontispiece (portrait), viii {4], 311 pp., illustrated, plates, portraits, index. Six Score 43 says "Frewen was engaged for a time in ranching on the Powder River in Wyoming, ultimately going broke. In all, ten chapters of this book deal with his experiences there. An English squire related, apparently, to virtually everybody who was anybody, including the Churchills and Beresfords, Frewen provides an archtypal British view of the cattle boom. His experience in Wyoming was but one part of his varied career, which was mainly to fight for Bimetallism. To read Frewen is to look at a lost world - the aristocracy of late Victorian England in full flower. This, transplanted to the Far West, makes a most entertaining narrative," Frewen also tells of meeting Sitting Bull near the site of the Custer massacre, and that Sitting Bull gave him a tour of the battlefield in 1884. Near fine, bright copy in the elusive dust jacket with light wear to the spine ends, corners and extremities.

Adventures Of A Farm Boy
by Paul Burke