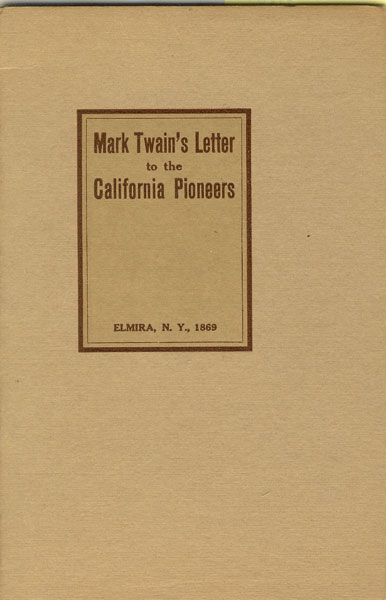 Other works by Mark Twain

First Edition, printed in a limited edition of 750 copies. 18 cm., printed tan wrappers, tied at spine. 16 pp. This letter was written by Mark Twain on October 11, 1869, in reply to an invitation from the New York Society of California Pioneers to attend a banquet to be given on October 13th, to the visiting members of the Society of California Pioneers of the Pacific Coast. "The period described in this letter is in 1863, after which time Twain left Nevada for the Coast (San Francisco); where in the course of three weeks he became 'broke;' he then became S.F. correspondent of his old paper 'The Daily Territorial Enterprise,' and in five months was on his feet again and had obtained a 'new berth' in which he was to go to the Sandwich Islands and write some letters to the Sacramento, (Cal.) 'Union.'" Fine.