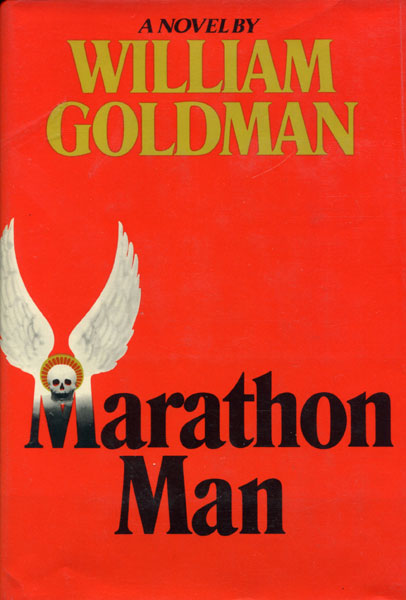 First edition. Fine in dust jacket. The source for the 1976 John Schlesinger movie of the same name with Dustin Hoffman and Laurence Olivier cast as antagonists. A former Nazi SS dentist at Auschwitz, Dr. Christian Szell, now residing in Paraguay, aims to smuggle many diamonds out of the United States after the accidental death of his brother in New York City. This involves a secret intelligence agency named "The Division." Meanwhile, at Columbia University, Thomas Babington "Babe" Levy is a postgraduate student in history and an aspiring marathon runner. He is haunted by the suicide of his brilliant academic father, H.V. Levy. Tom's PhD dissertation aims to clear his father's name of alleged Communist affiliations. Unbeknown to Babe, his elder brother by ten years, and best friend, 'Doc', works in The Division. Doc, who operates under the alias "Scylla," is murdered by Dr. Szell. Before he dies, Doc goes to Babe and dies in his brother's arms. Szell believes that Doc had told Babe about whether the diamonds he was planning to take are "safe" to take, so he tortures Babe....makes one want to cancel his next dental appointment.

The House Of Sudden Sleep.
by John. Hawk

Postscript To Murder.
by M.R.D. Meek

The Private Patient.
by P.D. James

The Suspect
by L. R. Wright