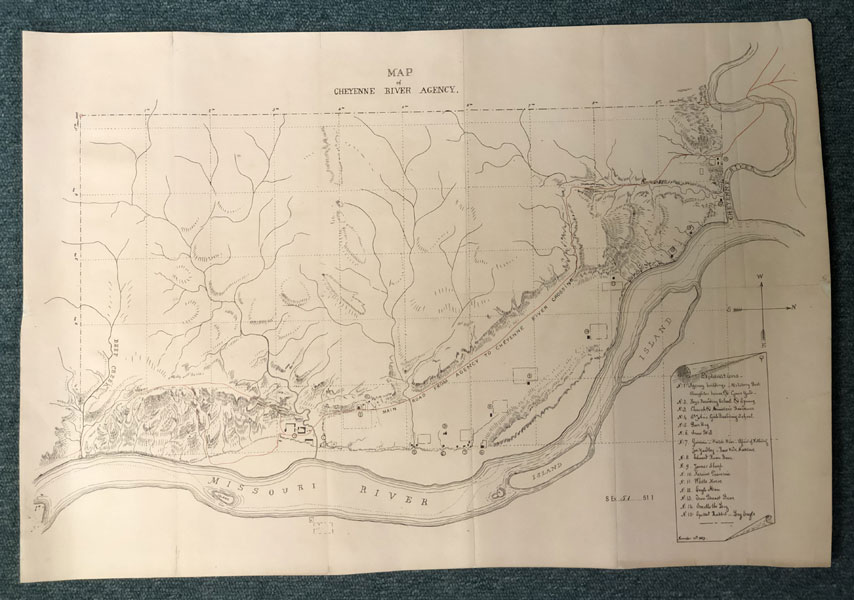 16 3/4" x 24 1/2" lithograph, lined map with roads overprinted in red. Established by the 1868 Treaty of Fort Laramie, the mammoth Great Sioux Reservation occupied all of what is now western South Dakota and a portion of Nebraska. After years of sporadic violence, precipitated in part by the discovery of gold in the Black Hills and including most famously the 1876 Battle of Little Big Horn, the Reservation was broken up by act of Congress in March 1889. Half the land was made available to homesteaders and ranchers, while the remainder was divided into five smaller reservations, of which one was the Cheyenne River Reservation. Bounded on the south by the Cheyenne River, the Reservation ran west of the Missouri and occupied some 5000 square miles in all. For reasons unclear, the Reservation failed to include the nearby Cheyenne River Agency, which was sited along the west bank of the Missouri south of its confluence with the Cheyenne ... that is, off the Reservation proper, on land apparently slated for release to homesteaders and ranchers. Thus, on or around October 31, 1889 Indian Agent Charles E. McChesney received a request from his superiors at the Bureau of Indian Affairs to provide "a description of the smallest tract of land that will embrace all of the agency and other buildings and improvements appertaining thereto, and at the same time serve the ordinary purposes of an agency." McChesney's response is dated November 15, 1889 and was published in Reports relative to the proposed division of the great Sioux Reservation, and recommending certain legislation (Senate Exec. Doc. No. 51, 51st Cong. 1st Sess. (1890)) In it McChesney describes the boundaries of the Agency and explains that its large size is due to the poverty of the land relative to its needs for hay, grazing and timber. McChesney’s account is accompanied by this map, which he describes as "a drawing… showing the location of the agency, the military post of Fort Bennett, adjoining the agency proper, the boys’ schools, St. John’s school, the Episcopal church, and the homes of a number of Indians, as well as the main wagon road to the Cheyenne River. The map is as accurate as can be made with the instruments here." (p. 12) All these locations are numbered on the map and identified by a legend on a trompe l’oeil scroll at lower right. Two features of the map bear particular witness to the Federal Government's ongoing attempts to "civilize" the Native American peoples. One is the parcels of land (numbered 5-15) assigned to individual families, which reflect the Dawes Allotment Act of 1887, which broke up communally-owned lands and distributed them as private family holdings. The intent was both to further weaken the hold of tribal leaders while encouraging families to shift from a nomadic existence to subsistence farming. The other is the Boys and Girls Boarding School and the Episcopal Church (numbered 2-4), all intended to "civilize" and "Christianize" the native population. Reflecting the odd fact that the Cheyenne River Agency lay outside the bounds of the Cheyenne River Reservation, McChesney's report ends on a poignant note. He asks for "surveys south of the Cheyenne River to fully protect the interests of the Indians now located on land to be opened to settlement. I have told these Indians that the Government would fully protect them in their rights, and pledged to them my official and personal aid to have their lines established and allotments made before the land is opened to white settlement." (p. 13) A detailed and interesting map of the Cheyenne River Agency, revealing evidence of the ongoing Federal effort to dispossess and "civilize" Native American peoples. Map verso lined with paper to improve stability, else in near fine condition.