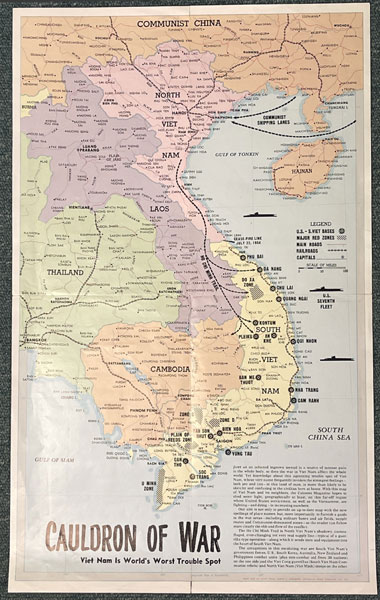 21 1/2" x 13" color news map done by staff artist Edwin I. Sundberg. "This color map of Vietnam and surrounding countries first appeared in The New York Sunday News Colorato Magazine Jan. 16, 1966. This reprint is being made available through arrangements with....REPUBLIC OF VIETNAM - REGIONAL EXCHANGE SYSTEN and THE ARMY AND AIR FORCE EXCHANGE SERVICE. (PACEX)." Most likely distributed to military personal in the field, the map extends from the Gulf of Siam and the South China Sea in the south to Communist China in the north. The U.S. Seventh Fleet appears just off the Eastern shore of Vietnam, and the Ho Chi Minh Trail extends from North Vietnam through Laos and into South Vietnam, with spurs directed at Danang (where the first American combat troops landed in 1965), the Do Xa Zone, Kontum, Pleiku, and Cambodia. Railroads extend from the top of the map to the bottom ... reaching into Thailand, Cambodia and Communist China. Communist Shipping Lanes from China lead to North Vietnam. The legend identifies symbols for shared U.S.-South Vietnam bases; Major Red Zones; Main Roads; Railroads, and Capitals. The text at the bottom of the map reads, "Just as an infected ingrown toenail is a source of intense pain to the whole body so does the war in Viet Nam affect the whole world. Yet knowledge about this agonizing trouble spot of Viet Nam, whose very name frequently invokes the strongest feelings ... both pro and con ... in this land of ours, is more than likely to be sketchy and confusing to the civilian here at home. With this map of Viet Nam and its neighbors, the Colorado Magazine hopes to shed some light, geographically at least, on this far-off region where United States servicemen, as well as the Vietnamese, are fighting ... and dying ... in increasing numbers. Our aim is not only to provide an up-to-date map with the new spellings of place names, but, more importantly to furnish a guide to the war areas ... including military bases and air fields, supply routes and Communist-dominated zones ... so the reader can follow more clearly the ebb and flow of the conflict. The Ho Chi Minh Trail is North Viet Nam's shadowy, camouflaged, ever-changing yet very real supply line ... typical of a guerilla-type operation ... along which it sends men and equipment into the heart of South View Nam. The antagonists in this escalating war are South Viet Nam's government forces, U.S., South Korea, Australia, New Zealand and Philippines combat units (plus non-combat aid from 30 nations) on the one side and the Viet Cong guerillas (South Viet Nam Communist rebels) and North Viet Nam (Viet Minh) troopers on the other." OCLC records just three copies. Faint fold lines and one small tear to bottom edge of lower fold crease. Attractive and suitable for framing.

The Story Of Ajax, Life In The Big …
by Alva J. Noyes