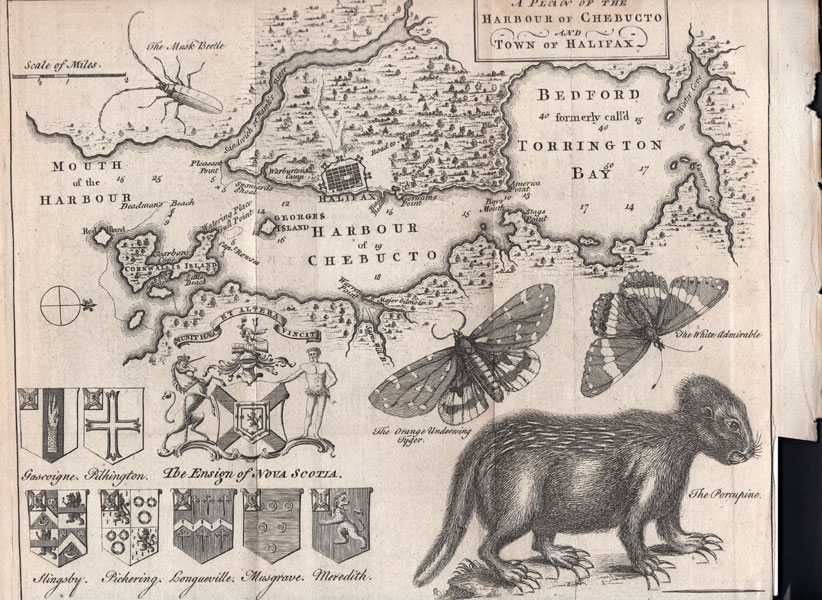 First edition. 27.2 x 22.1 cm [10 5/8" x 7 5/8"] black & white, very attractive and early map of the town of Halifax, Nova Scotia and vicinity. This map is commonly referred to as "The Porcupine Map" named for its awkward depiction of a porcupine at the lower right corner of the map.The top portion of the map is oriented to the west and includes "Bedford formerly called Torrington Bay," Cornwallis Island, George's Island, and a grid plan of Halifax with fortifications. The map is decorated with the "Orange Underwing Tyger" and the "White Admiral" butterflies, the Musk Beetle, the Porcupine, the "Ensign of Nova Scotia" coat of arms, and seven family coat of arms. The seven coat of arms are of the Baronets of Nova Scotia and include those of Gascoigne, Pilkington, Slingsby, Pickering, Longueville, Musgrave, and Meredith. This map was issued in the July, 1750 issue of Gentleman's Magazine Kershaw 813 attributes the map to Moses Harris due to his initials appearing in the vegetation below the title block. However Jolly credits Thomas Jefferys because the butterflies depicted were a part of a collection advertised in the associated article as being on display at Jeffery's address in Charing Cross, London. A bit of toning to the edges and some faint fold creases, else a very good copy.

The Vaquero.
PAUL A. ROSSI