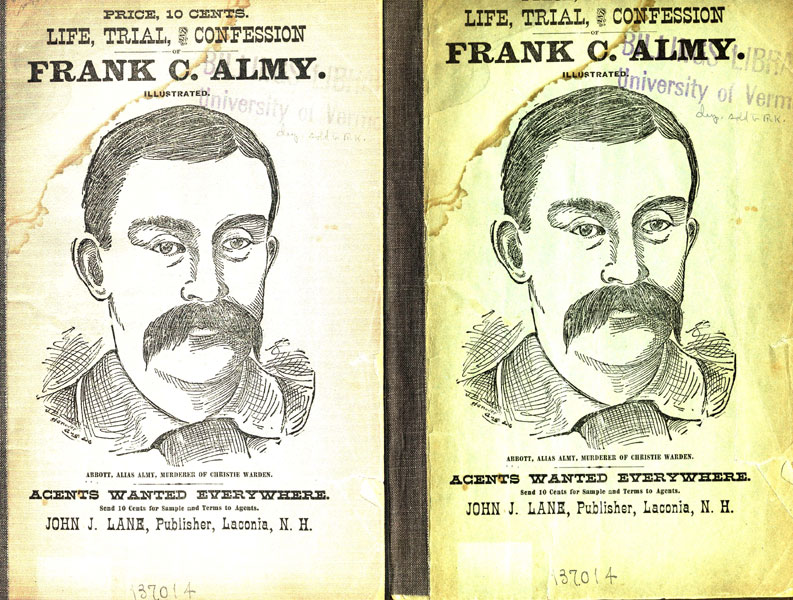 First edition. 8vo. Original pictorial wrappers,bound into unprinted boards with titles written in ink on the front cover, 32 pp., illustrated. McDade's Annals of Murder # 6 says "Almy, a rejected suitor, murdered Christie Warden on July 17, 1891, at Hanover, New Hampshire. He lived for a month in the Warden family barn while posses were searching for him, and when he was captured, it was discovered that he was the George Abbott who had escaped over the wall of the New Hampshire State Prison while serving a fifteen-year term for burglary." After his escape from the Vermont State Prison, Abbott had headed south to Texas where he worked for a time on a ranch. This is an ex-library copy released from the University of Vermont and is stamped accordingly on the front cover with the number "137.014" written at the bottom of the front cover and the title page. There are no other library makings. An old water stain to the top edge of front and rear covers, fore-edges have a few closed tears and minor chips, and lightly tanned at the edges of covers, else a good, clean copy of a scarce item.

The Kid's Last Night, And Other Stories Of …
by James Steven Peters