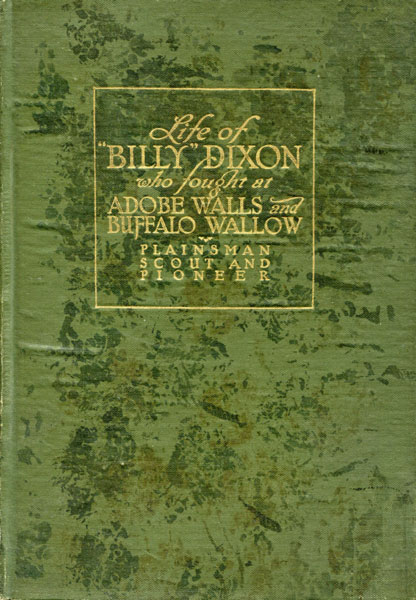 First edition. 8vo. Green cloth, titles stamped in gold gilt on the front cover and spine, 320 pp., illustrations from old photographs. "A narrative in which is described many things relating to the early Southwest, with an account of the fight between Indians and buffalo hunters at Adobe Walls, and the desperate engagement at Buffalo Wallow, for which Congress voted the Medal of Honor to the survivors." Born in West Virginia in 1850, Billy Dixon lived in Missouri from 1862 until 1865, when he took a job with a freight contractor as a bull-whacker and mule-skinner in Kansas. He freighted throughout western Kansas and Nebraska, and eastern Colorado for 4 years. In 1869, Dixon joined a hunting and trapping venture in the Saline River Valley, northwest of Fort Hays. Billy's excellent marksmanship soon led him to the highly profitable trade in buffalo hides. He invested in a supply store and did quite well until his partner "sold out" and took off with the proceeds during Billy's absence. He hunted the Texas Panhandle in the early and mid 1870's. Billy Dixon was one of 28 men and 1 woman who fought off a large party of hostile Indians in the second Battle of Adobe Walls. He scouted for Gen. Nelson Miles in 1874, when carrying dispatches to Fort Supply, Dixon and 5 others were attacked by Indians. Billy Dixon received the Congressional Medal of Honor for his part in the action. Still scouting for General Miles, Dixon was present at the rescue of the Germaine sisters from the Cheyenne in November, 1874. Dixon saved the Nolan Expedition in 1877 by leading them to water while in pursuit of hostile Comanches on the Staked Plains. Dixon returned to civilian life in 1883. He worked on the Turkey Trot Ranch before homesteading at the site of the original Adobe Walls. Eventually he homesteaded again in Cimarron County, Oklahoma, where he died in 1913. An excellent biography. Six small, old water spots to the rear cover, minor wear to the spine ends and corners, and former owner's inked name on the front fly leaf, else a near fine copy.

Brave Men & Cold Steel. A History Of …
by Doug And Nancy Ward. Perkins