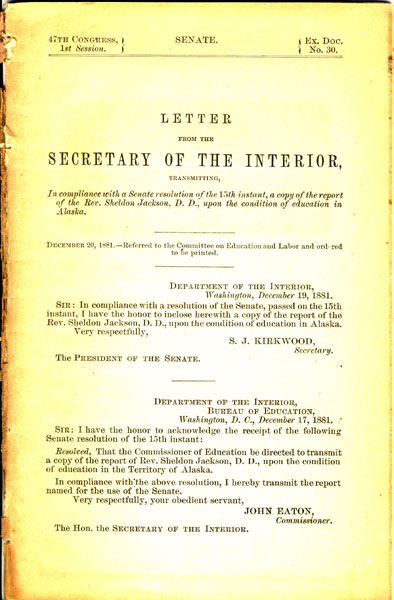 Letter From The Secretary Of The Interior, Transmitting, In Compliance With A Senate Resolution Of The 15th Instant, A Copy Of The Report Of The Rev. Sheldon Jackson, D. D., Upon The Condition Of Education In Alaska

Other works by REV SHELDON JACKSON

First edition. 8vo. Disbound printed wrappers, 28 pp., illustrated, plates, map. Senate Executive Document No. 30, 47th Congress, 1st Session. Contains five full-page plates and a folding sketch map of Alaska. Jackson was the first Presbyterian missionary to work in Alaska, arriving in 1877, and was a tireless advocate for Alaskan statehood, as well as for the spiritual and economic well being of the native population. Between 1877 and 1885, when he received an official appointment as General Education Agent in Alaska, he established Presbyterian mission schools in six Alaska communities and lobbied religious and political leaders for private and Congressional funds for education in Alaska. This early report includes an overview of the education under the Russian government and education since the purchase of Alaska, followed by details on schools in Fort Wrangel, Sitka, and among various native tribes and is illustrated with photos of students at some of Jackson's Indian schools. Front and rear covers uniformly tanned at the extremities, else an internally clean copy with all plates and folding map in fine condition. Overall a near fine copy.

Purple Sage. The Exploits, Adventures, And Writings Of …
GLENN SHIRLEY

All In The Day's Riding, "Down In The …
WILL JAMES