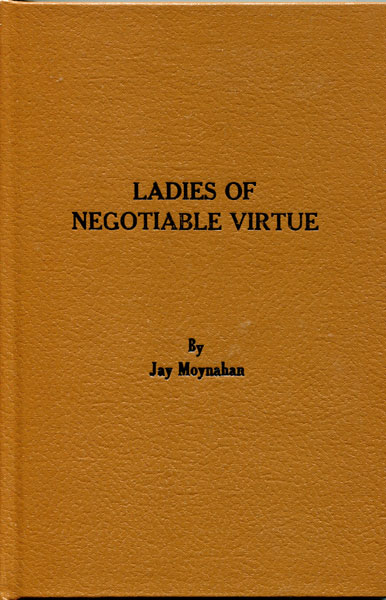 Ladies Of Negotiable Virtue: An Account Of Pioneer Prostitutes And The Dance Halls, Saloons, Cribs, And Brothels Where They Plied Their Trade, Along With Floor Plans Of The Establishments And Photographs Of The Women

First edition. Limited edition to 525 copies numbered and signed by the author. 8vo. Brown cloth, 123 pp., acknowledgments, photo credits, table of contents, introduction, illustrated, end notes, bibliography. During the time the west was settled by non-Native Americans, the initial population was about 90% male, mostly single or without their wives which meant there was an acute shortage of women as the camps and towns were established. The result of this disproportionate distribution was a need for female companionship and/or for women who would engage in sexual activities. To fill this need, a number of women went west and became pioneer prostitutes hoping to find their fortune. They saw their migration as a way to strike it rich by mining the men who had traveled west. It did not matter whether they were ranchers, miners, loggers, cowboys or railroaders, as long as they had money and would pay for sex, the women would be there to sell their wares. This book deals with a look at all facets of the pioneer prostitute complete with photos of the best known places where the ladies practiced their craft, floor plans of these establishments and of course the ever-popular photos of the ladies themselves. As new, without dust jacket, as issued.

A Summary Of Travel To Grand Canyon
by Thomas E. Way

A Cry Unheard. The Story Of Indian Attacks …
by Doyle. Marshall