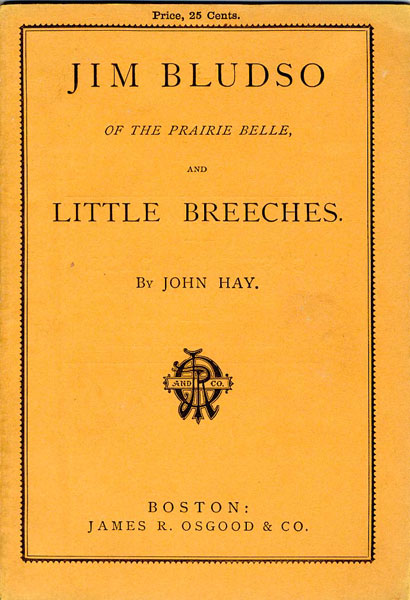 Jim Bludso Of The Prairie Belle, And Little Breeches

First edition. 7" x 4 3/4" printed orange wrappers. 23 pages with 7 full-page illustrations by S. Eytinge, Jr. Two poems written in dialect and known as the Pike County Ballads. Pike county is in southwestern Illinois west of Springfield. Jim Bludso is poem that memorialized Jim Bludso's courage and selflessness in sacrificing his own life so that the passengers on his burning boat, The Prairie Belle, might survive. In Little Breeches, a team of horses takes fright and carries a small child off into a snow blizzard, where they are quickly lost from sight. John Hay was one of Lincoln's private secretaries. He and John Nicolay wrote the 7 volume life and history of Lincoln. At the end of his career he was the U.S. ambassador to Great Britain. Very minor wear to bottom of spine. The 25 cent price is marked at the upper edge of the front panel. Very good condition. Scarce.

Reno. The Recreational Center Of America. This Book …
by John F. Ness