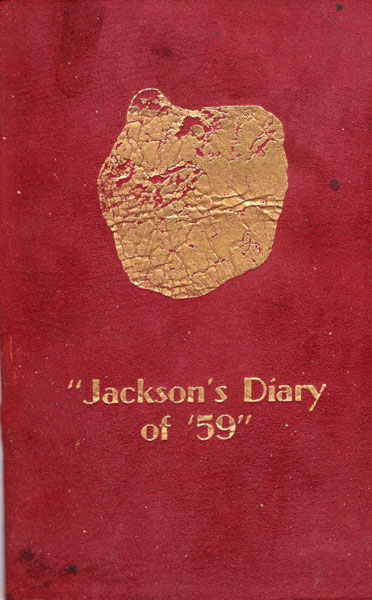 "Jackson's Diary Of '59." George A. Jackson Who First Discovered Gold In Colorado

by George A Jackson

First edition. 6 1/4" x 4 1/8" red suede leather with decoration (gold nugget) and titles stamped in gold gilt, 20 pp. (including title page), illustrated, plates. A portrait of Jackson is printed on the title page. Jackson is credited for first finding serious gold in Colorado in 1859. With 15 small photographs and small drawings. Plus a two-page center photograph of a morning scene in "Idaho Springs" crowded with animals, wagons, and hopeful miners. Eberstadt 105: 92 says "This foundation document was printed in a few copies for local distribution. Jackson, the first man to find the shining metal in Colorado's golden hills, had been prospecting in California in 1857. In the spring of 1858, he went to Colorado, rather with the view of hunting and trapping than searching for gold. At Cherry Creek he encamped at Smith's trading post, then proceeded to the Cache la Poudre, and, during the winter, continued on to the head of Clear Creek. From thence, deciding to prospect the region, he followed up the Vasquez River to Grass Valley and Soda Creek and on to Chicago Creek. On the fateful day of January 5, 1859, he recorded in his journal: 'Moved up to next creek on south side . . . good gravel here; looks like it would carry gold. Wind has blown snow off rim, but gravel is hard frozen; panned out two cups; nothing but fine colors. June 6th: . . . Mountain lion came into camp; dogs killed him after I had broken his back with belt axe; h..l of a fight. June 7th: . . . Panned out eight treaty cups; found nothing but fine gold; Ninth cup got a NUGGET OF COARSE GOLD.' Thus crudely is raw history writ; uncouthly and without prescience. But in that 'ninth cup' with its 'nugget of coarse gold' was the lodestone which was to stampede a nation and populate a vast section of the Rocky Mountain Wilderness." The pages are loose with the first and last pages tanned, and the suede covers lightly worn. Overall a good copy. The booklet is complete and is very rare.

Man And Metals. A History Of Mining In …
by T. A. Rickard