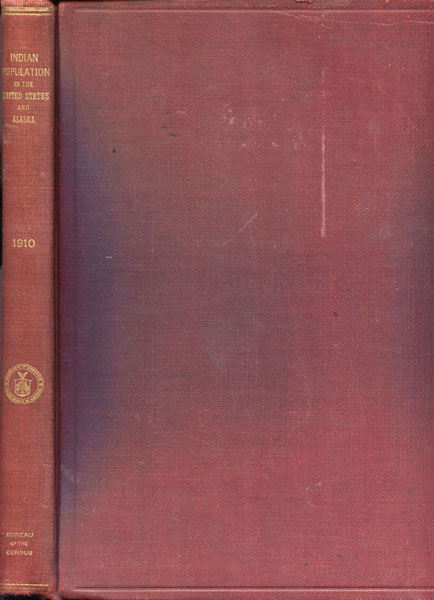 Indian Population In The United States And Alaska, 1910

First edition. Large quarto, cloth, 285 pp. 19 maps and large color folding map (17.25" w x 20" h), 109 tales, 106 charts, diagrams and graphs. Issued by the Bureau of the Census, Department of Commerce. The large color folding map is entitled "Linguistic Families of American Indians North of Mexico" by J.W. Powell - 1915. "Revised by Members of the State of the Bureau of American Ethnology." This attractive and important map spans from 15 degrees latitude north to the Polar Circle; including all of North America, Greenland, parts of Northeastern Siberia, and several Caribbean Islands. An exceptionally thorough presentation of statistics relating to the Indian population of the United States and Alaska collected for the Thirteenth Decennia Census, taken in 1910. The field work and reparation of this report by the Bureau of the Census was aided by the Office of Indian Affairs and the Bureau of American Ethnology. The topics covered by this special report are: "Population; Proportion of Mixed-Bloods; Sex Distribution; Age Distribution; Stocks and Tribes; In Detail By Purity of Blood, Tribal Mixture, Sex and Age; Fecundity and Vitality; Marital Condition; School Attendance; Illiteracy; Inability to Speak English; Occupations; and Indians Taxed and Not Taxed." Throughout much of the report the statistics from 1910 are compared to those of numerous various studies between 1860 and 1905. The gathering of this data, examination and verification of the tabulated results, and preparation of the general tables and textual matter spanned over 5 years. As stated by the Director of the Census, Sam L. Rogers, "The completion of the entire report has necessarily been considerably delayed, but the statistics presented here have a permanent historical value, as it is not likely that another effort will be made to secure through the census special data regarding Indians as a separate and distinct element of the population." Inner front hinge cracked and somewhat loose, but holding. Cloth shows some light scuffing and soiling, and bumps to corners, else very good with clean near fine text block. Large folding map has closed tears at right edge, where bound into volume, with minor tape repairs on verso, but not extending into image of map; else map is clean with bright coloring identifying areas occupied by various linguistic families. An important and valuable report.

The American Sea. A Natural History Of The …
by Rezneat Darnell