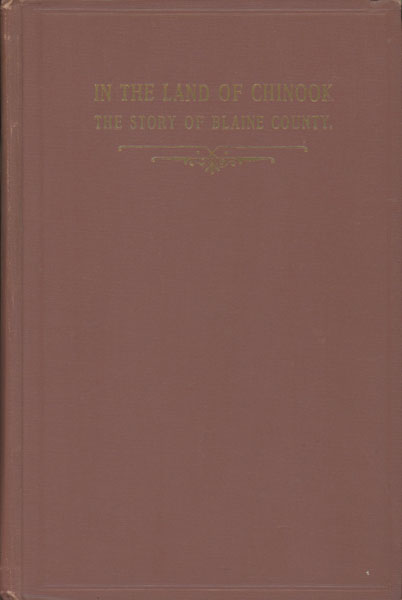 In The Land Of Chinook Or The Story Of Blaine County

Other works by NOYES, AL. J.

First edition. 8vo. Cloth, titles stamped in gilt on the front cover and spine, gray endpapers, 152 pp, 22.9 x 15.1cm., introduction, illustrated, portraits, index. Illustrations include a portrait of Charles M. Russell and with two letters by C. M. Russell and from photos, also a chapter on Russell. Six Guns 1625 says "Scarce." "Contains some material on Kid Curry and his killing of Pike Landusky." Material on the Gros Ventures, the Assiniboines, early pioneers, miners, cowboys, outlaws, Indian fights, Nez Perce and Sioux, Custer scout George Herendeen, etc. The account of Custer scout George Herendeen, who was left behind in the Reno Valley Fight along with Lt. Charles DeRudio, Private Thomas O'Neill and scout Billy Jackson. Included is a biography and photograph of Herendeen, who testified at the Reno Court of Inquiry in 1879. After the court proceedings were finished, Herendeen quotes the officer in charge of the court, Col. John H. King, as saying to him, "Mr. Herendeen, I believe you are the only man who has told the truth" (p. 109). Also includes material on the Nez Perce campaign. Minor wear to the corners, else a near fine copy.

Forgotten Mines And Treasures Of The Great Southwest
WAYNE WINTERS