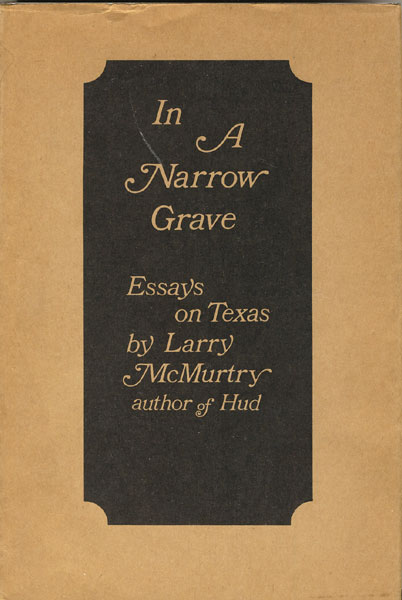 In A Narrow Grave. Essays On Texas

Other works by LARRY MCMURTRY

First edition, first (suppressed) printing. 8vo. Cloth, titles on a paper label on spine, xviii, 177 pp., preface, introduction, bibliography. The quite elusive "skycrapers" edition, with the ripe harvest of typos throughout the text. Whaley 38 says, "Examples of errors: p. 56, line 2 - 'in in'; p. 105, paragraph 2, sixth line reads 'skycrapers' instead of 'skyscrapers'; p. 134, paragraph 2, sixth line is a repeat of third line." There are also other errors including line one of last paragraph of front flap which reads "head" instead of "heard." Except for review copies, copies sent to bookshops before the errors were discovered (chiefly to local bookshops), and a handful retained by the publisher to sell towards his retirement, the bulk of the edition was buried in a well behind the old Encino offices. It has been established that the totality of copies which eluded destruction, through one device or another, numbered somewhat less than 100. Those copies which were sent out as review copies are by far the least common. Fine in dust jacket.

Three Wonderlands Of The American West. Being The …
THOMAS D MURPHY