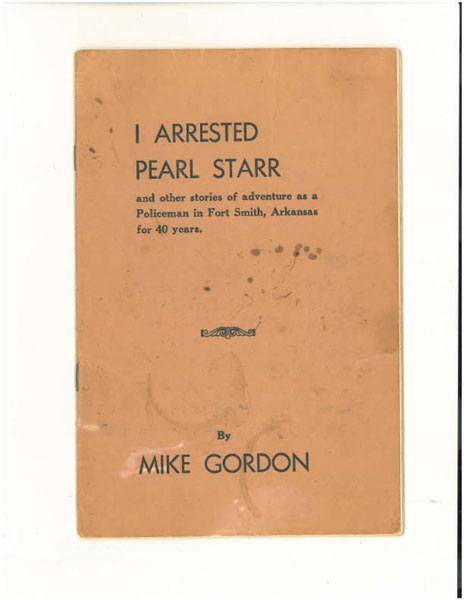 I Arrested Pearl Starr And Other Stories Of Adventure As A Policeman In Fort Smith, Arkansas For 40 Years

9" x 6" tan printed wrappers. [3]-32 pages, photograph of author, foreword. Mike Gordon was a policeman in Fort Smith from 1907 to 1947, when he retired. During his time of service, encountered several incidences, some dangerous, some light-hearted that he offers here to include stories about Pearl Starr. Rosie Lee Reed, better known as Pearl Starr, was an American bordello owner and businesswoman in Arkansas, the first child of Belle Starr, the reputed "Bandit Queen" of the American Old West, and Jim Reed, Belle's first husband. True stories dealing with thefts, shootings, gambling, whiskey, robberies, judges, call-girls, etc. Also has some material on Henry Starr. Soiling to wrappers and first few pages as well as some damp staining to those pages whereas one of those pages (page 4) text is impacted but still legible. Hand-written corrections and annotations by author throughout the booklet with the following four lines typed and taped at the end of tall text, "David, Lockhart, Lee Sutton and Henry Starr was robbing the bank at Harrison, Arkansas, when Henry Starr was killed. This information was given me by Frank Carlton.” Six Guns 848 says, "This book tells about Pearl, Belle's daughter, running a house "on the line" and has some material about Henry Star." Hand-written corrections by the author throughout. Moderate soiling to front wrapper, along with light soiling to first few pages and with crease to top and bottom corners. wrappers,

A Voice For The Dead. A Forensic Investigator's …
by James E. With Katherine Ramsland Starrs