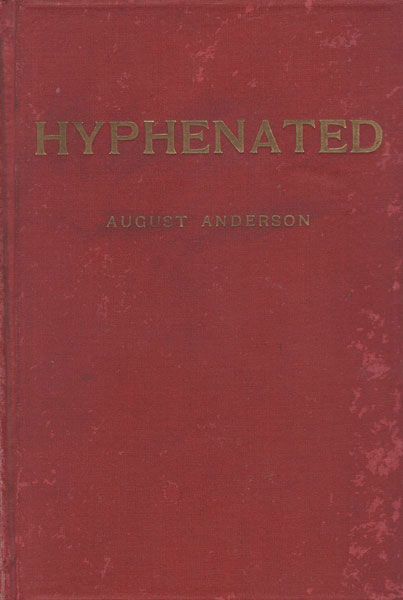 Hyphenated; Or, The Life Story Of S. M. Swenson

Other works by AUGUST ANDERSON

First edition. 8vo. Red cloth, titles stamped in gold gilt on front cover and spine, 290 pp. introduction, frontispiece, plates, portraits, 19cm. S. M. Swenson was the founder of the famous SMS Ranch of Texas. Herd 100 says, "Rare." Jeff Dykes says "Rare." Cloth lightly soiled with minor wear to the spine ends and a tiny chip from top corner of free front fly leaf, else a very good copy of a rare ranch history. "Svante Magnus Svenson was born in Sweden and immigrated to America in 1836, where he worked in New York City as a store clerk before traveling to Baltimore, Maryland, where he worked as a railroad bookkeeper, and eventually settling in Texas. Swenson worked for John Adriance, who operated a large-scale carriage delivery service of general merchandise. At this time, Swenson met Dr. George Long, who, due to his poor health, requested that Swenson tend to him and his plantation. The doctor died in 1842, and Swenson took control over the estate, buying out a neighboring plantation a year later. In 1847 Swenson began encouraging Swedish immigrants to move to Texas, with the assistance of his uncle Swante Palm, creating what became known as the 'Swedish pipeline.' In 1850 Swenson moved to Austin and established a mercantile business with his uncle Swante Palm. While running the business, Swenson continued to buy Texas Railroad Certificates and to acquire land. Swenson began shipments of the Texas pecan to the North and East; and in 1850 established himself in the general merchandise and banking business at Austin. In 1851 he founded the SMS Ranch on West Texas lands. In 1854 he invested in the Buffalo Bayou, Brazos and Colorado Railway, which gained him acres of land in northwestern and western Texas. Swenson's greatest interest lay in the accumulation of land. He traded many of the manifold supplies carried by his large frontier trading post for Texas railroad land certificates. Under the privilege then accorded to holders and owners of such certificates to file on any untaken state land, Swenson in 1854 began acquiring acreage of unclaimed properties in Northwest Texas. By 1860 he owned over 128,000 acres around Austin, in addition to his West Texas holdings, which had increased to nearly 500,000 acres. SMS Ranches eventually became one of the largest landowners in Texas."