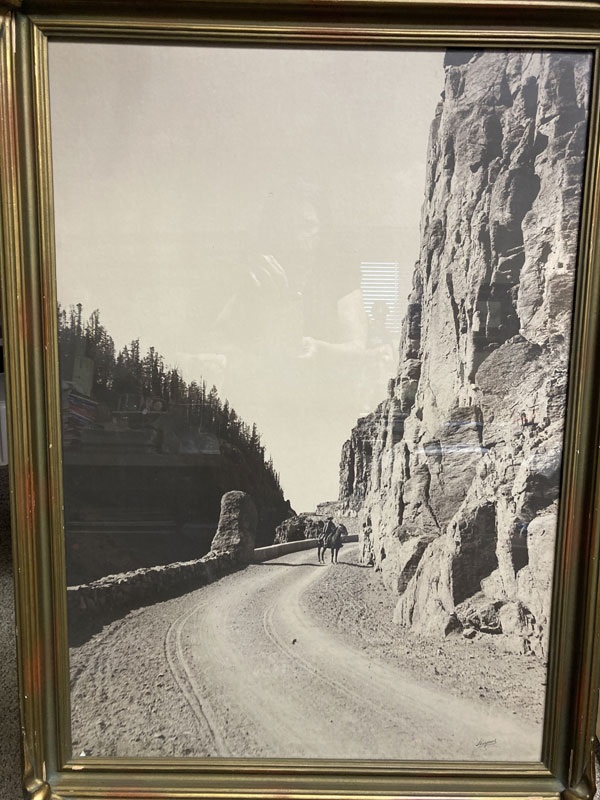 Mammoth 78 x 55 cm [30 3/4" x 21 3/4"] silver print photograph in a contemporary gilt painted 86 x 63 cm. [34" x 25"] wooden frame. Image has strong contrasts with "Haynes" at the lower right corner. Nice view of a horseman on the original Golden Gate viaduct in Yellowstone National Park, this road is sometimes photographed from the other end of this road. For most of the 20th century, the Golden Gate viaduct was hailed as one of the premier engineering feats in Yellowstone National Park. Indeed, one M. Eldridge in a 1910 article ("Touring Yellowstone Park on Government Highways") credited the viaduct as the "most notable engineering feature of the whole road system." The image is of a mounted rider on the trestle at Golden Gate. This was purchased at the Isabel Haynes sale in Bozeman in 1993, and hung in the Haynes home for many years. We have handled a number of Haynes images through the years and this is not a view that we have handled previously and is not one that is shown or mentioned in the references known to us. The rider in this mage is unknown, but due to the fact that this hung in the Haynes home, it is likely someone known to F. Jay Haynes, and perhaps the man himself may be the rider. Photographer F. Jay Haynes was one of the 19th century Northwest’s best-known individuals. Beginning with a studio business in Moorhead, Minnesota, on the Minnesota-Dakota Territory border, Haynes became well known for his photographs of the great bonanza farms of the 1870s; for his portraits of Indians; his views of the Northern Pacific Rail Road route; and most especially for his successful career as photographer and concessionaire in Yellowstone National Park. Haynes toured the park with his camera every year between 1881 and his death forty years later. First selling photoprints, then pictorial souvenirs, and eventually postcards, Haynes' images were probably the most widely distributed and popularly recognized of any photographer of the American West. Between 1885 and 1905 Haynes also operated a travelling photo studio in a converted Pullman railroad car. This mobility not only made Haynes Palace Studio Car one of the best-known features of the Northern Pacific, but also gave him camera access to sights from the Great Lakes to Puget Sound. Haynes' base of operations began in Moorhead, Minnesota, was moved to Fargo, North Dakota, in 1879 and in 1889 to Saint Paul, Minnesota There he maintained a central studio and photo printing operation, and operated winter offices for his Studio Car and Yellowstone Park photography and transportation concessions, the Monida and Yellowstone and later Yellowstone-Western Stage companies. The Studio Car ceased travelling after the 1904 season and Haynes severed his ties to the Northern Pacific to court ties to the Union Pacific, a working relationship that fed the growing stage line he loved. When the Secretary of the Interior cancelled the MY concession lease in September, 1913, as a result of a suit, Haynes regrouped and was able to have a new lease renegotiated by the end of the year. It was in force until the consolidation of Park concessions in 1916, the year that Haynes retired and sold his business to his son Jack Ellis Haynes. Yellowstone's "Grand Old Man" still made annual trips to the Park until heart failure claimed him in 1921. An uncommon photograph, in the original frame and in fine condition.

Gun Notches. The Life Story Of A Cowboy-Soldier
by Captain Thomas H. As Told To Al Cohn And Joe Chisholm Rynning

The Brocklebank Riddle
by Hubert Wales