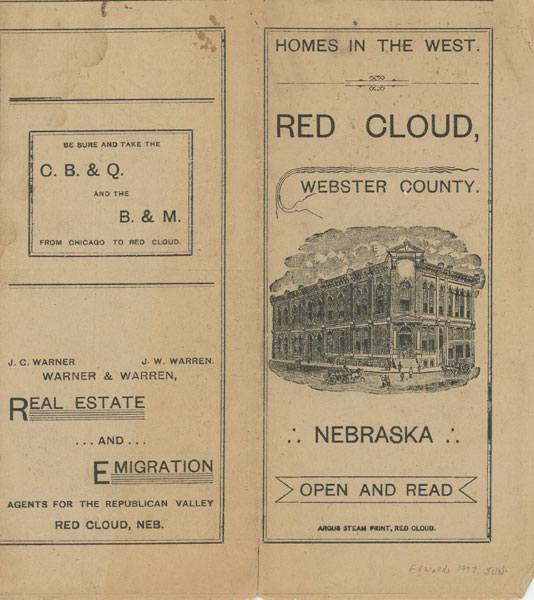 First edition. 8vo. 13 1/2" x 12" illustrated map on one side plus pictures of the Farmers and Merchants Bank and the home of J. L. Miner, Red Cloud, and front and rear cover panels. The other side promotes Webster County and Red Cloud plus views of homes of prominent residents as well as businesses. A promotional booklet with plat map produced by the real estate firm of Warner & Warren of Republican Valley. Touted here are both Webster County and the city of Red Cloud, including the businesses, public schools, street-car lines, factories, creamery, real estate, railroads, and more. Advertisements for the Burlington & Missouri River Railway as well as the Chicago, Burlington and Quincy R. R., both of which ran from Chicago to Red Cloud are included as well. The map of Webster County, Nebraska shows the town of Red Cloud and sixteen of its neighboring counties, as well as railroad lines, rivers, and property divisions. This map was produced by Fort Abstract Co. of Red Cloud, said here to keep a complete set of books and plats of all towns and sub-divisions. Illustrations depict buildings in Red Cloud, various residences of town citizens, and appealing views of the town. Red Cloud was founded on homestead land in 1871, by a group of men including Silas Garber (1833-1905), who would go on to serve as Nebraska's Governor from 1875 to 1879. The town was named by Garber and local businessmen in honor of the chief of the Olgalala tribe of the Teton-Lakota Sioux. When Webster County was organized, Red Cloud was designated as the county seat. In 1879, the Burlington & Missouri River Railway reached Red Cloud -- stimulating immigration from America's eastern seaboard, and bringing a variety of cultural heritages to town, including those of Germany, Scandinavia, Great Britain and Canada, Austro-Hungary (aka Bohemians), and so forth. The town's cultural melting pot was marvelously depicted in the literary works of Willa Cather, who lived in Red Cloud for several years with her family beginning in 1883 at the age of nine. Cather would use the town as the basis for such fictional towns as "Black Hawk" in My Antonia (1918). We could find no copies recorded in OCLC. A few small old water stains to the rear cover, short separations and small punctures along old folds.

Deadwood Dick On Deck; Or, Calamity Jane, The …
by Edw. L. Wheeler

The Mammoth Cave Of Kentucky.
by J. Hoyes Panton