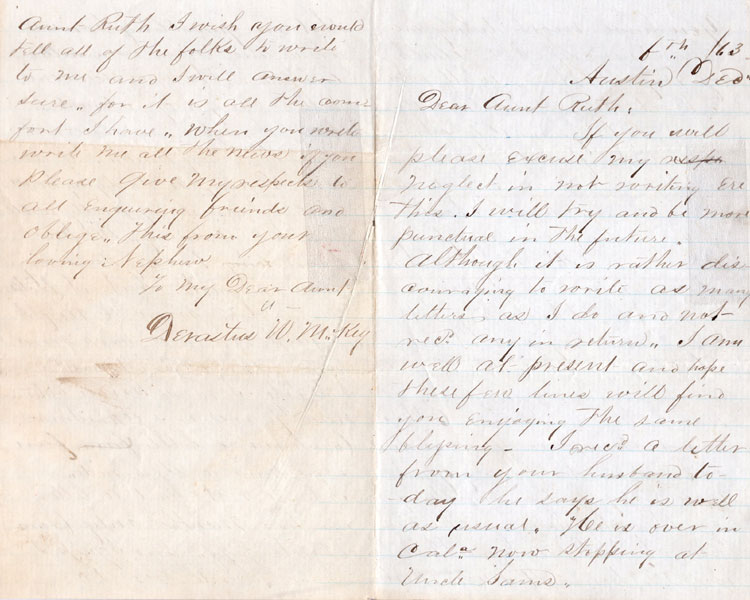 7½” x 4¾”. Single sheet, folded, making four pages, approximately 750 words; in original mailing envelope. An interesting letter from a lonesome innkeeper to his aunt, with stirring imagery of the Old West. Derastus McKey apparently moved to Austin, Nevada after taking care of his brother's affairs in Silver City and found himself in the midst of a boomtown. He ran a boarding house there and wrote his aunt, likely in December of 1863, and told her how that spring, “there were not a hundred souls here. Now there are 5 or 6 thousand . . . over one half being gamblers.” Not long after word of the silver strike, the population of Austin and the surrounding Reese River Mining District exploded to 10,000. McKey also reported to his aunt that she could “judge something of the character of the people when I tell you that in 24 hours 4 men were shot in gambling houses and one man committed suicide. There is someone killed every day almost.” A fine letter documenting the high times of what is now a ghost town. Very good, bright letter with old folds.

Zeckendorfs And Steinfelds, Merchant Princes Of The American …
by Bettina O'Neil. Lyons

Washington Irving On The Prairie Or A Narrative …
Henry Leavitt Ellsworth [Edited By Stanley T. Williams And Barbara D. Simison]

Miles And Miles Of Texas. 100 Years Of …
by Carol With Roger Allen Polson Dawson