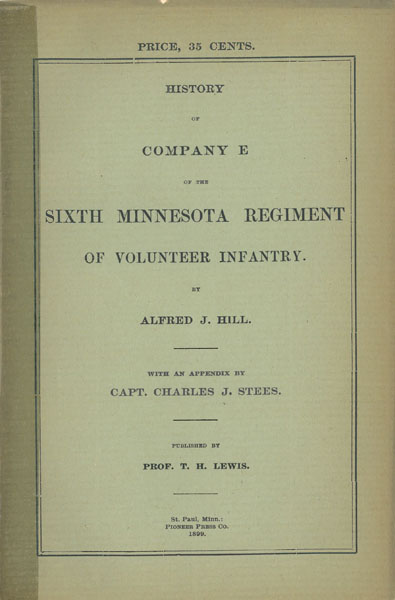 Other works by ALFRED J. HILL

Printed wrappers, 45pp., frontis, charts, tables, appendix. In the spring of 1862 the Governor of Minnesota called for volunteers to form a company of men to be sent to Virginia to fight for the Union Army. Company E was formed from the 94 men recruited. They began to drill and prepare at Ft. Snelling in July and August of 1862. However all plans changed in mid-August of 1862 when the Sioux Indians attacked and massacred scores of settlers in the Minnesota River Valley. This account chronicles the activities of these volunteers as they pursue the Sioux to punish them for their crimes and liberate the many captive women and children. The later involvement of Company E in the Civil War in 1864 and 1865, in Illinois, Missouri, Louisiana and Alabama is also recorded here. An important addition to this work is the appendix authored by Capt. Charles J. Stees, "Lieut. Col. Marshall's raid into Dakota-1862." Stees provides a first-hand account of the continued pursuit of the Sioux into the Dakota territory in October, 1862. A rare account. The spine of the exceptionally fragile wrappers have been very neatly reinforced with transparent tape and one tiny chip to top edge of front wrapper, else near Fine, and the nicest copy we've ever seen.

Making Peace With Cochise. The 1872 Journal Of …
SWEENEY, EDWIN R. [EDITED BY]

Robbers, Rogues And Ruffians. True Tales Of The …
HOWARD BRYAN