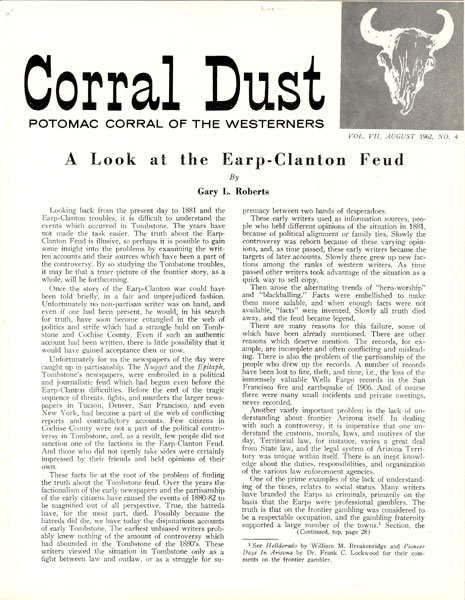 First edition. Quarto. Vol. VII, No. 4, August, 1962 issue of Corral Dust by the Potomac Corral of the Westerners. Printed wrappers, 8 pp., illustrated. An interesting analysis of the Earp-Clanton feud and the events that preceded it. Also includes article written by Robert H. Rose entitled, "With Padre Kino on the Trail - III." Padre Kino was a was a Jesuit, missionary, geographer, explorer, cartographer and astronomer. For the last 24 years of his life he worked in the region then known as the Pimería Alta, modern-day Sonora in Mexico and southern Arizona in the United States. He explored the region and worked with the indigenous Native American population, including primarily the Tohono O'Odham, Sobaipuri and other Upper Piman groups. He proved that the Baja California Peninsula is not an island by leading an overland expedition there. By the time of his death he had established 24 missions and visitas (country chapels or visiting stations). Fine.

The Mountain That Was "God" / (Title Page) …
JOHN H WILLIAMS