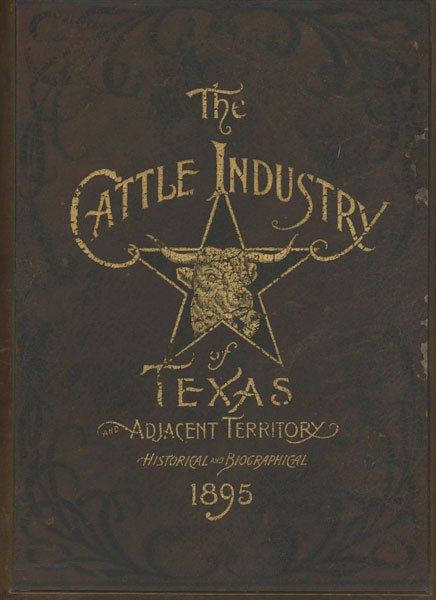 Other works by JAMES COX

First edition. Thick quarto. Calf, stamped in gilt and blind, [1], 743 pp., colored frontispiece, illustrated, plates, portraits, index to historical section, index to biographies, index to illustrations. Colored frontispiece by Gean Smith. BTB 34 says it best "This compendium on Texas cattle and cattlemen is also one of the rarest Texas books. J. Frank Dobie once said: 'In 1928 I traded a pair of store-bought boots to my Uncle Neville Dobie for his copy of this book. A man would have to throw in a young Santa Gertrudis bull now to get a copy.' Conceived as a mug book to be sold primarily to the people whose biographies appeared in it, the final published book contained so much of value on the cattle industry that it has become a classic in its field. Nearly 400 pages are devoted to biographies of some 449 Texas cattlemen, and these sketches are a goldmine for research into the cowboy and cattle industry. Jeff Dykes has called it 'an unequalled source of information and pictures of pioneer cattlemen.' The other half of the volume, written by Cox, provides one of the two or three best contemporary accounts of the history of the Texas cattle trade. Thirteen chapters are devoted to the subject, and include sections on barbed wire, mavericks, cattle drives, economics of the industry, improving the longhorn breed, and Indian depredations on the cattle range. One of the best sections is entitled 'THE COWBOY, AS HE WAS, AND IS, AND IS SUPPOSED TO HAVE BEEN.' Dobie found the chapter more valuable than the works of Emerson Hough and Philip Ashton Rollins. The Cox volume, being sent primarily to biographees, never entered the mainstream of the bookstore market, although it is said the work sold at $25.00 per copy. In addition, the spine of the book was unequal to the task of holding together 743 folio pages and many copies literally fell apart. Furthermore, the publisher's remaining stock was destroyed, either by accidental fire or by simply being dumped on the trash heap. Thus are rarities created in the world of books." Six Score 24 says "One of the 'big four' cattle books, and after Freeman's PROSE AND POETRY, the most important. The book contains a wealth of information, and is a cornerstone in any range library. It is a vital and useful book." Minor wear to the covers and spine replaced by a master conservator, else a near fine, bright, tight copy. An exceptional copy with the rare color frontispiece, the original endpapers and the original binding in nice, unblemished condition.

The Jesse James Northfield Raid, Confessions Of The …
JOHN KOBLAS

Memorial Of Citizens Of The Territory Of Dakota, …
J. P KIDDER