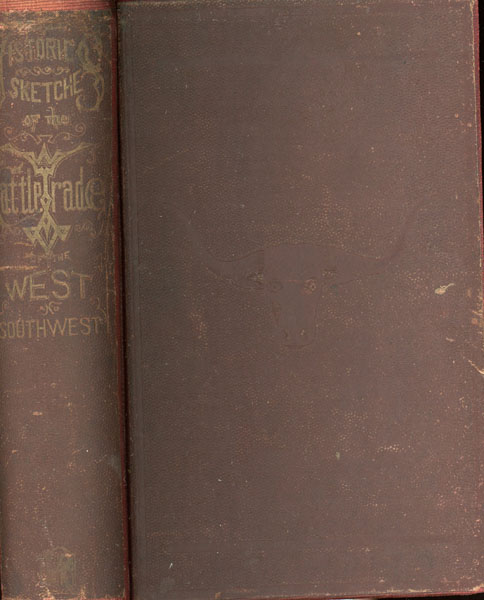 Historic Sketches Of The Cattle Trade Of The West And Southwest

First edition. Thick octavo. Original burgandy cloth. First state with longhorn impression on both front and rear covers [i-vi], [1]-427, [428 blank] [1-24 advertisements]. illustrated with 57 portraits, 53 views (most full page) and 16 cartoons from wood engravings by Henry Worrall, re-backed with the original spine laid down, both front and rear endpapers have been replaced (original endpapers contained advertisements), all edges red color, extremities worn, cloth rubbed, some internal foxing to a few preliminary pages, otherwise a very good solid copy, complete with the often absent illustration facing page 416. Joseph G. McCoy was born on a farm in Sangamon County, Illinois., in 1837. After marrying Sarah Epler in 1861, he entered the mule and cattle raising business. At the close of the Civil War, McCoy expanded his enterprise by buying animals in large quantities and shipping them to major livestock centers. McCoy viewed the livestock industry from a national perspective and recognized the need for better contacts between southwestern ranchers, Midwestern feeders, and meat-packers. He resolved to build a stock depot west of farming sections on the Great Plains to which cowboys from Texas could drive Longhorn herds. Abilene, Kansas, was chosen as the site for McCoy's cattle pens. He purchased a 250-acre tract at the edge of this frontier village and built a pen to handle a thousand head of cattle. He sent agents south to acquaint Texas cowmen with his plan to receive the fall drives. Although the railroad builders considered his plans impractical, he finally succeeded in obtaining cooperation from the Kansas Pacific Railway provided he assumed all the financial risks. The cattle would be shipped from his proposed stockyards to Kansas City. He then made an agreement with the Hannibal and St. Joseph line, which provided a route to Quincy, Ill.; from there the cattle could be sent to Chicago. The first herds arrived in August 1867; an initial shipment to Chicago left Abilene in September. By the end of the year 35,000 head had been driven over the Chisholm Trail to Abilene, and in 1868 the number rose to 75,000 head; by 1870 the number doubled. Bill Reese states that the book is an "account of the opening of the Texas trails after The Civil War up to 1873...the first general account of the cattle trade, and is one of the pillars of any range library." Graff 2594 says "One of the most interesting and important books on the nineteenth century cattle trade." One of the "Big 4" cattle books.