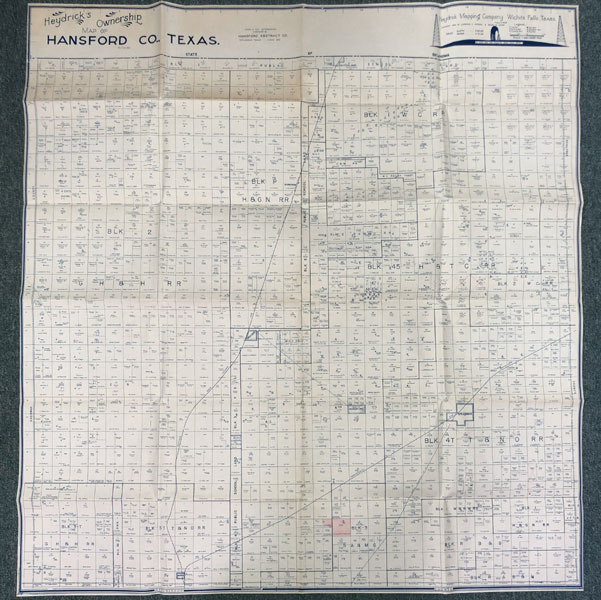 First edition. A large 44" x 42 1/2" sheet map printed one side, folded, else quite crisp. A very scarce and quite large map that provides a detailed depiction of land ownership in Hansford County, situated in the very northern end of the Texas panhandle, during the mid-1950s. The Heydrick Mapping Company began publishing land maps of oil-rich Texas counties in the late 1910s and 1920s. Indeed, Heydrick produced many Texas county maps in the 1920s, but none for Hansford County, likely since the discovery of oil there and the beginning of commercial production were still several decades in the future. "Oil was discovered in Hansford County in 1937, and significant production began in the 1950s. In 1956 production totaled almost 548,000 barrels; in 1960, almost 1,342,000 barrels; in 1974, about 590,000 barrels; and in 1990, 463,833 barrels. About 202,000 barrels were produced in 2000, and by the end of that year 38,279,469 barrels had been extracted from county lands since 1937" -- Texas State Handbook Online. At the time this map was published, Shell, Gulf, Humble, Phillips, and other prominent companies had developed a significant presence in the county, and production was beginning to boom. The delineation of land ownership on the map reflects this, but it shows many individual owners as well. All Heydrick maps of Texas are scarce, regardless of when they were produced, with the vast majority being located in only one or two copies. This particular example provides an excellent cartographic depiction of the first oil boom in the northernmost portion of the state. Not in OCLC. Folded, otherwise a quite crisp map with a few scattered contemporary pencil annotations, else a very good copy.