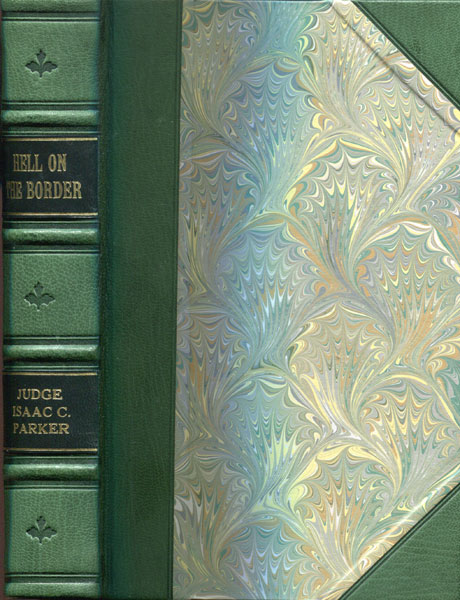 Hell On The Border; He Hanged Eighty-Eight Men.

First edition. Cloth, 718pp., numerous illustrations, facsimiles. Sub-title: A History of the Great United States Criminal Court at Fort Smith, Arkansas, and of Crime and Criminals in the Indian Territory, and the Trial and Punishment Thereof Before His Honor Judge Isaac C. Parker, "The Terror of Law-Breakers", and by the Courts of Said Territory, Embracing the Leading Sentences and Charges to Grand and Petit Juries Delivered by the World Famous Jurist..... "An important source book, all the statistical part of the book, the biographical sketches of those connected with the court and the transcriptions from the court records, were the work of C.P. Sterns and are said to be scrupulously accurate. The same cannot be said of all the narrative written by Harman."---Graff 1785. "Exceedingly rare. The rare original has become a collectors item and is the chief source of practically every book and feature story on the old court and Oklahoma outlaws.... The first edition was soon exhausted because of the reputation of Judge Parker's court.... The book contains much material on the outlaws of Indian Territory who were tried and condemned in Parker's court."---Ramon Adams(1969). "....the great book about Judge Isaac Parker and his federal court at Fort Smith. One of the Dalton brothers was killed while serving as a deputy for the judge and, of course, there is much on outlaws and peace and peace officers."---Jeff Dykes in Rare Western Outlaw Books. A rare and important work. This work was originally published in wrappers, with 720 pages. Our copy has been rebound in green 3/4 leather and green marbled paper with green leather corner tips and raised bands with titles stamped in gold on black leather without retaining the wrappers or the frontis. As issued, the last 6 pages are comprised of "Press Opinions" provided to the publisher to help promote the book (pages 715-720). Our copy is missing the corner of pages 717 & 718, resulting in the loss of some text, and pages 719 & 720 are not present. However facsimile copies of pages 717, 718, 719, and 720 have been obtained to ensure total reading of the "Press Opinions." They are laid-in. Leather binding and remainder of text block

Limited Edition Poster - Map Of The Northwest …
by Warren A Ferris