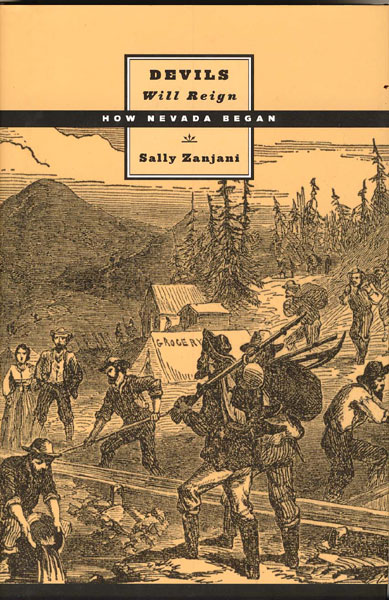 Devils Will Reign. How Nevada Began

First edition. 8vo. Brown cloth, titles stamped in gold gilt on the spine, tan front and rear endpapers, xi [3], 222 pp., acknowledgments, illustrated, portraits, notes, bibliography, index. An in-depth history of the years between the first trading post in what is now Nevada and the birth of Nevada Territory, 1851-1861. "Zanjani weaves the exciting saga of this rowdy frontier and its colorful characters into the larger story of those eventful years - the discovery of gold in California and silver in the Nevada Territory; the debate over slavery and the Civil War that made the fate of the Far West, a matter of congressional concern; and the Mormon establishment in Utah that prompted national suspicion of the sect's ambitions for an inland empire. In this turbulent climate, the remote, sparsely populated region on the eastern slope of the Sierra Nevada acquired remarkable importance." A book in the Wilbur S. Shepperson series in Nevada history. As new, unread copy in dust jacket.

Three Years Among The Indians In North Dakota
by J. H Drips

The Opening Of Texas To Foreign Settlement 1801-1821
by M. A., Mattie Austin Hatcher