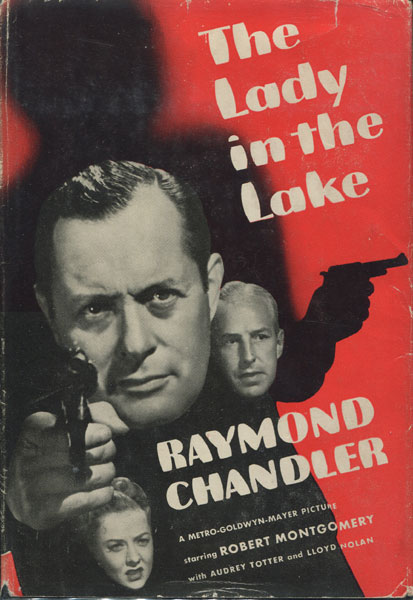 The Lady In The Lake.

First edition thus. Photoplay edition issued to coincide with the release of the film starring Robert Montgomery as Marlowe and directed by him as well. Presentation inscription by Robert Montgomery, "For Jack Cordes, With many thanks and all good wishes. This was my first directorial job. Robert Montgomery, March 1965." Jack Cordes was a long time book collector of mysteries and crime, sci-fi, and genre fiction whose collection was initially disbursed in 2012. He was also big on books-into-film titles as well and was in a position to get books inscribed by some major Hollywood figures. Fine, bright copy in lightly rubbed dust jacket with light wear to foot of spine and corners, and a few small closed tears and nicks to the extremities, else an attractive copy. There is no fading with this copy. The front and rear dust jacket panels have pictures of Montgomery, Lloyd Nolan, Audrey Totter, and a scene from the film. In addition to Robert Montgomery, Audrey Totter, Lloyd Nolan, Leon Ames, and Jayne Meadows also starred in the film. After a lady is found drowned in the lake, dead bodies begin to pile up, unrelated story lines twist around each other, police corruption is exposed, and the sleazy underbelly of 1940s Los Angeles is revealed.

Deadly Is The Diamond And Three Other Novelettes …
by Mignon G. Eberhart

The Mordida Man.
by Ross. Thomas