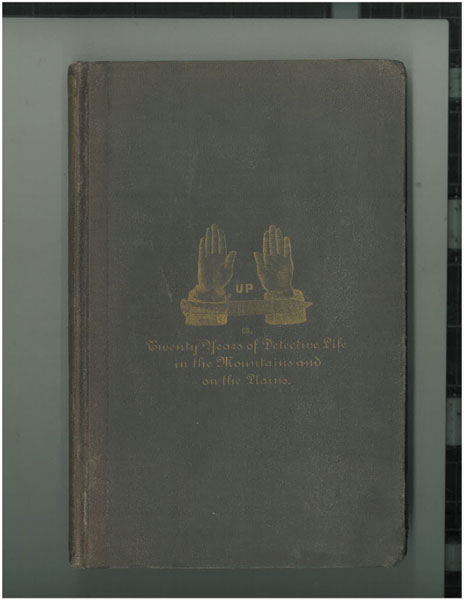 Hands Up; Or, Twenty Years Of Detective Life In The Mountains And On The Plains

Other works by D. J COOK

First Edition. Original brown cloth. 285pp. Frontis, Illustrations. "Reminiscences by General D. J. Cook, Superintendent of the Rocky Mountain Detective Association. A Condensed Criminal History of the Far West." Cook was a soldier, city marshal of Denver, sheriff of Arapahoe County, U. S. Marshal, Major General of Colorado Militia, and founder & chief of the Rocky Mountain Detective Association. "This book was written by Thomas F. Dawson, Director of the Colorado Historical Society ... Mr. Dawson told me also, that the reason both this work and his "Ute Massacre" were so rare, was because the copies were used to make paper wadding for cartridges during the Indian Campaign." ... Edward Eberstadt. "A grisly and entertaining account of the experiences of General David J. Cook, Superintendent of the Rocky Mountain Detective Association. This sensationalist narrative takes the reader through the true history of crime in the Colorado area during the 1860's and 70's. The times were hard and the men desperate, and there was almost no law enforcement to speak of. The few brave souls who did try to battle crime saw such scenes of butchery as cannot be spoken of without a shudder." Rebacked with original spine laid-down. Some light rubbing with minor wear to edges and corners. A rare work! Made even more so by the signed presentation by D. J. Cook under the frontis illustration portrait!!